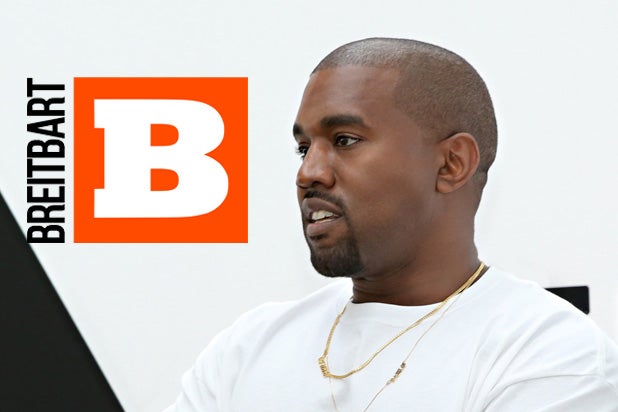 Could the next lines Kanye West drops be on Breitbart?

That certainly wouldn’t be an issue for the website’s editor-in-chief Alex Marlow, who told TheWrap he would happily collaborate with the rapper.

“Absolutely we’d publish Kanye or interview him on our national radio shows on SiriusXM or in print,” Marlow said.

“Kanye is one of the few people in public life — or non-public life, for that matter — who appears to be ‘fully realized,'” Marlow added. “In other words, he gives off the impression that he thinks what he wants and does what he wants without preoccupation with the judgment of others.”

Marlow, who started as the personal assistant to site founder Andrew Breitbart, added that the rapper’s recent embrace of President Donald Trump appears to be the real deal.

“It doesn’t look like a PR stunt since the impulse to boycott people who disagree politically is a tactic used overwhelmingly by the left compared to the right,” he said. “So Kanye probably stands to lose far more fans than he stands to gain by taking a high-profile pro-Trump stance.”

A rep for West did not immediately respond to request for comment from TheWrap on whether he would consider a collaboration with the conservative site.

Since tweeting his support for right wing Twitter pundit Candace Owens last month, Kanye has increasingly emerged as one of the platform’s most vocal and ardent Trump boosters.

In a series of ever-more arresting tweets, Kanye said that he “loved” Trump and released images of himself wearing a MAGA hat. Trump himself took note of the brouhaha, tweeting out his own love for the rapper last week.

In truth, Kanye has long been chummy with Trump, meeting with the billionaire at his home in Trump Tower for a private meeting just after the 2016 election and before the inauguration.

“He’s a good man,” Trump told reporters before patting the rapper on the shoulder. “We’ve been friends for a long time.”

The Trump-Kanye relationship isn't exactly new. Remember this moment from the transition

TRUMP: "He's a good man … We've been friends for a long time." pic.twitter.com/0ge3V6CVZd

Kanye continued to stir the outrage for his liberal fans after an appearance on TMZ Wednesday, in which he appeared to suggested that slavery was a choice and earned a published dressing down by TMZ reporter Van Lathan.

“When you hear about slavery for 400 years — for 400 years?! That sounds like a choice,” West told stunned interviews at the entertainment gossip site. “You was there for 400 years, and it’s all of y’all? It’s like we’re mentally in prison.” He later clarified his remarks on Twitter.

West’s mischievous streak would likely play well in Breitbart, a website famous for launching uber-troll Milo Yiannopoulos onto the media landscape. The site played a pivotal role in corralling the Trump base and shaping the U.S. political conversation in the year before Trump’s rise to the White House. The company’s former chairman Steve Bannon was even elevated to the position of White House chief strategist.

Things toned down markedly after Bannon’s final departure from the company in January following fallout over nasty comments about Trump he offered to journalist Michael Wolff for his book “Fire and Fury: Inside the Trump White House.”