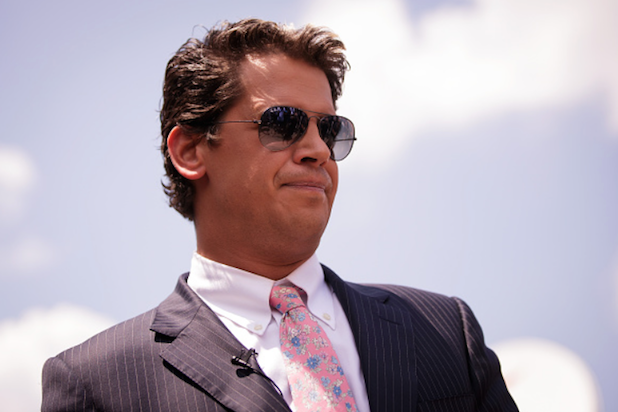 The deal is worth $250,000, according to The Hollywood Reporter, which first broke the news. The book, titled “Dangerous,” will be released on March 14.

The outspoken, gay British writer and favorite of the alt-right describes himself as “the most fabulous supervillain on the internet.” Back in July, Yiannopoulos was booted from Twitter after encouraging his followers to send racist messages to “Ghostbusters” star Leslie Jones, and for trolling the comedic actress himself.

“They said banning me from Twitter would finish me off. Just as I predicted, the opposite has happened,” Yiannopoulos told THR. “Did it hurt Madonna being banned from MTV in the 1990s? Did all that negative press hurt Donald Trump’s chances of winning the election?”

#FreeMilo quickly became a top trend on the social media platform as Yiannopoulos’ fans came out to support him after the Twitter ban. Yiannopoulos called the social network’s decision’s “cowardly,” and bashed Twitter at length on Breitbart.

“Twitter has confirmed itself as a safe space for Muslim terrorists and Black Lives Matter extremists, but a no-go zone for conservatives,” he said. “Twitter is holding me responsible for the actions of fans and trolls using the special pretzel logic of the left. Where are the Twitter police when Justin Bieber‘s fans cut themselves on his behalf?”

It appears Yiannopoulos has become even more popular since the Twitter ban, evident by the thousands of people who recently viewed a Facebook Live video of the Breitbart editor mocking Italian restaurant chain Olive Garden while he dined at the establishment.

In September, Out magazine, the country’s largest LGBT monthly publication, came under fire for featuring a profile article on Yiannopoulos.

The story, titled “Send In the Clown: Internet Supervillain Milo Doesn’t Care That You Hate Him,” by Chadwick Moore, described him as an “alt-right crusader” and “professional mischief maker and provocateur.”