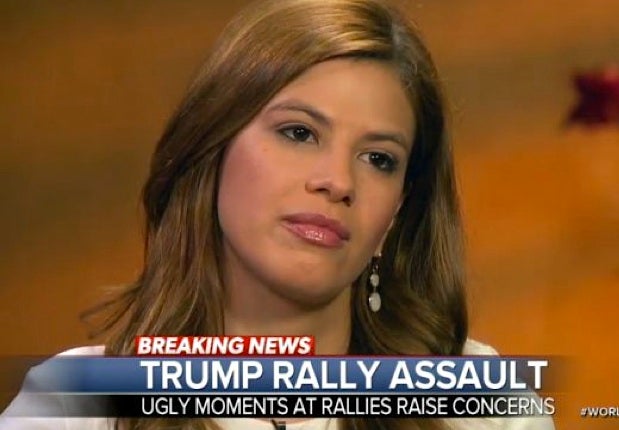 Michelle Fields, the political reporter for Breitbart who alleges she was manhandled by Corey Lewandowski, the campaign manager for the Trump presidential campaign.

Breitbart reportedly sent out cease and desist letters to some of the employees who left the company in the past week.

Former reporter Michelle Fields and former editor Ben Shapiro are among a handful of employees who resigned from the website over its response to Fields alleged assault by Donald Trump’s campaign manager Corey Lewandowski. Now, the conservative website is getting litigious, according to Politico.

Breitbart has gotten into legal battles with ex-employees in the past, and now most staffers are on contracts that likely include non-disparagement clauses.

Also Read: Ex-Breitbart Reporter Says Company Turned Its Back on Her To Curry Favor With Trump Campaign

Lewandowski allegedly grabbed Fields and pulled her away from the GOP frontrunner. The Trump campaign denied the incident and Breitbart published a story questioning Fields’ version of the situation. Joel Pollak, a senior editor-at-large, reportedly told staffers to stop defending Fields.

Fields wrote on Twitter that she “can’t stand with an organization that won’t stand by me.” The site should be “ashamed” of “their treatment” of Fields, Shapiro said.

Shapiro issued his own statement, which accuses Bannon of shaping the company “into Trump’s personal Pravda.”

Publicist Kurt Bardella was also shaken by the incident and resigned from working with Breitbart last week.