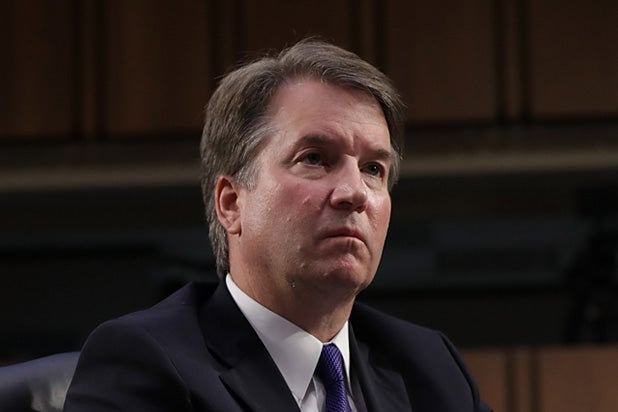 Senate Democrats are investigating a new allegation of sexual misconduct against Supreme Court nominee Brett Kavanaugh that dates back to 1983-84, his freshman year at Yale.

In a report on Sunday by Ronan Farrow for The New Yorker, a former classmate named Deborah Ramirez said that a drunken Kavanaugh exposed himself at a dorm party and “thrust his penis in her face, and caused her to touch it without her consent as she pushed him away.”

Ramirez, whom the magazine said was hesitant to come forward at first and after careful recollection of the past and consulting with an attorney, is now asking for the F.B.I. to investigate.

Kavanaugh has denied the new accusation. “This alleged event from 35 years ago did not happen,” he wrote in a statement. “The people who knew me then know that this did not happen, and have said so. This is a smear, plain and simple. I look forward to testifying on Thursday about the truth, and defending my good name — and the reputation for character and integrity I have spent a lifetime building — against these last-minute allegations.”

Despite Ramirez’s accusation and that of Christine Blasey Ford — who has committed to testifying before the Senate Judiciary Committee on Thursday about her accusation that Kavanaugh sexually assaulted her when they were both in high school — the White House continues to support him to replace retiring Anthony Kennedy on the Supreme Court.

“This 35-year-old, uncorroborated claim is the latest in a coordinated smear campaign by the Democrats designed to tear down a good man,” White House spokesperson Kerri Kupe said. “This claim is denied by all who were said to be present and is wholly inconsistent with what many women and men who knew Judge Kavanaugh at the time in college say. The White House stands firmly behind Judge Kavanaugh.”

According to the New Yorker, Senate Republicans learned of the new accusation last week, and then pressed for an acceleration of the committee vote.

Ramirez said that she attended a dorm room party at Yale’s Lawrance Hall when she was a first-year student. During a drinking game in which she became inebriated, she told the New Yorker that a male student pointed a “gag plastic penis” at her as another watched from nearby and that a third student then exposed himself.

“I remember a penis being in front of my face,” she told the New Yorker. “I knew that’s not what I wanted, even in that state of mind.”

After one bystander laughed and told her to “kiss it,” she told the magazine that she pushed him away, inadvertently touching it in the process: “I was embarrassed and ashamed and humiliated.” That is when she said she remembered Kavanaugh standing beside her, pulling up his pants and laughing. “I can still see his face.”

She went on to say that she remembered another student yelling down the hall, “Brett Kavanaugh just put his penis in Debbie’s face.”

“It was his full name,” Ramirez told the New Yorker. “I don’t think it was just ‘Brett.’ And I remember hearing and being mortified that this was out there.”

Ramirez, a registered Democrat, said she came forward despite knowing that the FBI or the Senate Judiciary Committee will question her about her own drunken state, gaps in details about the incident and motivation for coming forward.

The New Yorker reached out to several dozen classmates of Ramirez and Kavanaugh about the night in question, with many not responding, others declining to comment or saying they didn’t attend or remember the party.

One student remembered hearing about the incident from someone else a day or two later, the magazine wrote, and that former student said they were “100 percent sure” that it was Kavanaugh who exposed himself.

Another classmate — Mark Krasberg, now an assistant professor of neurosurgery at the University of New Mexico — said Kavanaugh’s behavior became a frequent topic of conversation among other Yale students after his nomination.

One classmate whom Ramirez said encouraged Kavanaugh that night denied any memory of the party. “I don’t think Brett would flash himself to Debbie, or anyone, for that matter,” he told the New Yorker.