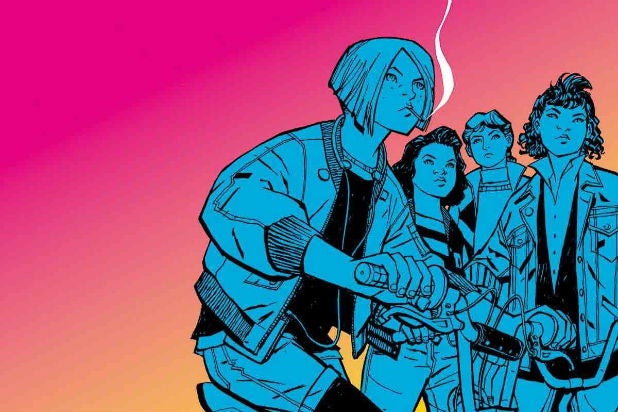 Amazon Studios has given a series commitment to “Paper Girls,” an adaptation of the graphic novel written by Brian K. Vaughan, a person with knowledge of the situation told TheWrap. The project comes from Legendary Television and Plan B.

Stephany Folsom, who co-wrote “Toy Story 4,” will write and executive produce with Vaughan and Plan B. “Paper Girls” is the first project to come out of Vaughan’s multi-year, overall deal with Legendary Entertainment.

Set in the fictional town of Stony Stream, Ohio, the series tells the story of a group of 12 year old girls who get caught up in a conflict between warring factions of time-travelers. While out delivering newspapers on the morning after Halloween, they encounter a strange force from the future. Sent out on an adventure through time that will save the world, they travel between our present, the past, and the future, they encounter future versions of themselves.

Vaughan is an executive producer on FX’s adaptation of another one of his graphic novels, “Y: The Last Man,” which follows the last surviving man on earth and the women who now run it. He also serves as an executive consultant on Hulu’s “Runaways.”

No cast or premiere date for the series has been announced.