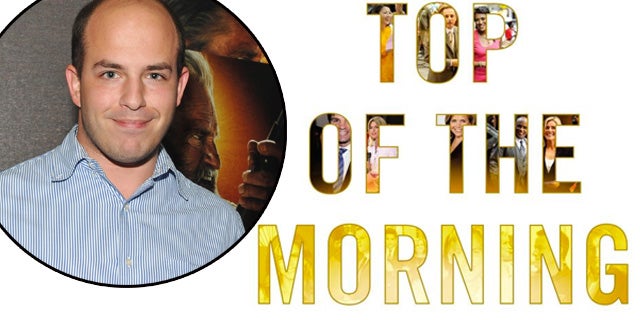 On Monday, bloggers had a field day when the New York Times published its review of New York Times reporter's Brian Stelter’s book, “Top of the Morning: Inside the Cutthroat World of Morning TV,” a day before it was to be released. The Daily Beast called it "scathing."

“I read it. I thought it was an anomaly,” Stelter tells TheWrap.

Ed Bark's review surely would not have gotten as much pickup if it wasn’t for the fact that Stelter is a media reporter for the same publication.

Bark opens by writing that the book “on the nefarious network morning show wars ends up being like a breakfast made not quite to order.” He goes on to sum up the book as “Edible? Yes. Fulfilling? Not quite.”

It goes on to point out Stelter’s significant access to “GMA” over “Today” (which is understandable, given with what was going on with Ann Curry aka Operation Bambi), and the use of “a little overblown prose.”

“I expected a tough review from the Times,” the writer tells us. “I want the Times to give tough reviews. That’s partially why I read the Times. But, I’m more interested in readers' reviews.”

“I’ve been overwhelmed by positive messages from people on Twitter,” he points out.

Stelter, who set out to document NBC’s “Today’s” 17-year streak of ratings dominance over ABC’s “GMA,” found himself in the right place at the right time. The ABC show was closing the ratings gap and Curry had a target on her back. What followed was Stelter’s unprecedented access to both shows and the players as the morning show landscape was changing.

Stelter believes that the tone of the review isn't as bad as the press has made it out to be. “I don’t think the review is a significant thing positively or negatively,” the 27-year-old says.

He has been through something like this before. Stelter, who founded and sold the TVNewser blog to MediaBistro in 2004 while still attending Towson College, appeared in the 2011 documentary, “Page One: Inside the New York Times.”

“The review about the Times film was probably the harshest review I’ve ever read of a film,” he says. “Given that experience when I was in that film, I expected a tough review.”

Since Monday, more reviews of “Top of the Morning” have echoed themes in Bark’s piece. But, Stelter is probably not paying them any mind either.

“Frankly, I think the Amazon reviews are going to be so much more interesting for me,” he said. “I’m not just saying that as a line. I really believe it.”

“Top of the Morning: Inside the Cutthroat World of Morning” (Grand Central Publishing) is currently available at booksellers nationwide.