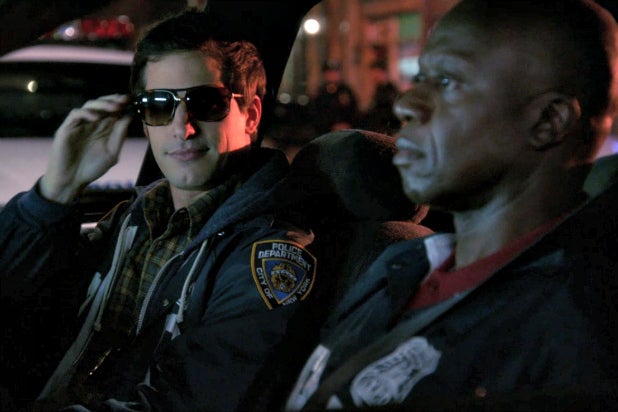 In the turkey day episode, viewers learn that Detective Jake Peralta (Andy Samberg) is not a fan of the giving thanks holiday. His sour disposition towards the fourth Thursday in November is rewarded when he and Captain Holt (Andre Braugher) have to leave Amy’s (Melissa Fumero) Thanksgiving dinner to go catch a left-handed perp who stole from the precinct evidence room.

While Jake is eager to get on with the caper investigation — which he characteristically has pretty much solved — Captain Holt takes his sweet time when they jump in the squad car. Naturally, that annoys Peralta, who elected to slip on his aviators despite the sun being completely down.

“Curb Your Enthusiasm’s” Larry David once remarked that the only people who wear sunglasses at night are “blind people and assholes.” And Jake Peralta is not blind.

“Brooklyn Nine-Nine” will move to the 9:30 time slot beginning Tuesday Feb. 4, Fox announced last week as part of its midseason shuffle. The new sitcom is also part of a comedy package with “New Girl” that will air immediately following Fox’s Super Bowl telecast.