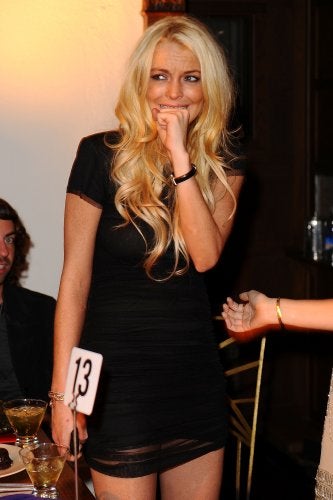 Diana Tamayo, one of the five sexy young Burglar Bunch members who are suspected of robbing the homes of such sexy young celebrities as Lindsay Lohan (pictured), Paris Hilton and Orlando Bloom, declined to enter a plea Tuesday.

Instead, Tamayo, who is out on bond, and her lawyers asked Superior Court Commissioner Donald Kennedy to put off her arraignment to Dec. 2 – a postponement date also granted to alleged cohort Nicholas Frank Prugo.

Kennedy granted the request, but then said there were issues with Tamayo’s $20,000 bail – namely, the fact that the District Attorney’s office hadn’t been consulted on the figure, which, in the felony complaint papers, is a suggested $100,000.

Tamayo’s lawyers told Kennedy they’d arrived at that amount with the Los Angeles Police Dept., which didn’t cut much ice with Commissioner Kennedy.

“You’ve been practicing law long enough,” the commissioner deadpanned, “to know that the police department doesn’t decide what day it is.”

Ultimately, however, Deputy D.A. Sarika Kapoor said she had no objections to Tamayo’s bail remaining at $20,000 for the time being. That could change when Tamayo is arraigned.

A tired-looking Tamayo then slipped out of Department 30 with her lawyers, who told news media they would not take questions.

Tamayo, 19, was attired in black, form-fitting slacks, high-heeled sandals and a tight top pulled over a silky blouse. With her long dark hair, she could’ve been an American Apparel model — if American Apparel carried a Twilight line for teen burglary suspects.