"Simpsons" fans who have been watching Homer, Bart, Lisa and Maggie on TV for the last 20 years may finally get the chance to become a part of the animated family. 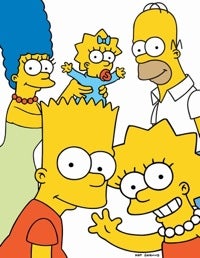 Morgan Spurlock, director of the Academy Award-nominated documentary "Super Size Me," is headed to San Diego’s Comic-Con this weekend to track down "Simpsons" super-fans for Fox’s "Simpsons 20th Anniversary Special — In 3-D! On Ice!"

Spurlock will produce and direct the special, which will take a look at the impact the longest-running comedy in TV history has had on American pop culture.

Fans chosen for the special will talk about what the show has meant to them and why they’re such big supporters of "The Simpsons."

"I hope we find some of the most incredible superfans that the world has ever seen," Spurlock, who has never been to Comic-Con before, said on a conference call Wednesday morning. "We hope to find people great people with stories to tell, maybe about how ‘The Simpsons" changed their life during their childhood."

But with so many die-hard fans descending upon San Diego, how can a "Simpsons" lover stand out? Spurlock suggests dressing up as a character from the show, turning your body into a "Simpsons" billboard or performing a bit from the program.

"We want somebody who’s so excited that they live and breathe the show — if you are so effected by the show that it exudes out of you skin and you can’t talk about anything else," he said.

Spurlock was chosen to work on the project because "Simpsons" execs knew he "wouldn’t do a glad hand, pat everyone on the back kind of special." He’s also a big fan of the show — he began watching in college and it "literally became an obsession."

He liked the way it dealt with big issues in ways that were accessible to the masses. That’s one of the parallels he said he has noted between his documentary about the dangers of fast food and "The Simpsons."

"It’s become a part of America and has touched everyone," he said. "The minute you get anyone on the phone, they’re spouting lines from the show. It has massive exposure on a worldwide level, and we’re going to shoot around the world to show that global phenomenon.

"It’s a consistently solid show you can turn to that you know will always be funny and make you think," he said. "Now that we have ‘South Park’ and ‘Family Guy,’ which are even edgier, we forget that ‘The Simpsons’ really pushed the envelope back in the day. You couldn’t help but be affected by the show. I didn’t feel like I was begin told anything or preached to. It had an influence on me."