Now it’s finally getting interesting: The Oscars may yet bring us the War of the Roses.

With the announcement of the Golden Globe nominations on Tuesday morning, the awards season officially heated up with ex-husband James Cameron (“Avatar”) competing in the Best Picture and Director categories against ex-wife Kathryn Bigelow (“The Hurt Locker”). 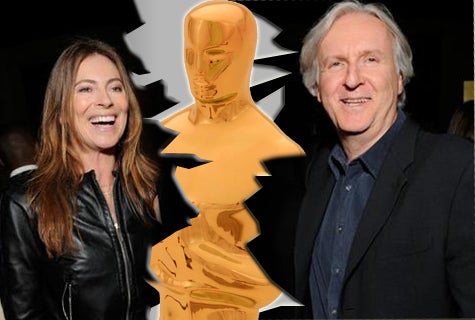 The Oscars could get messy.

Cameron’s been married five times – to Bigelow from 1989 to1991 —  and nominated for three Golden Globes.

Bigelow’s been married once, and this is her first Globes nomination.

The king of the world was asked by MTV News about this unusual face-off and allowed: "I’ve been divorced more times than I’ve been nominated. I don’t really know which one is more awkward."

And he made various gracious noises: "I couldn’t be happier to see her get a nomination, because it’s a recognition that’s long overdue,” he said, adding that they get along well. “I’ve known that she’s a genius filmmaker for a long time, and she’s always flirted with this sort of critical success.”

But we see sparks flying in the coming weeks.

This is shaping up to be better than James Carville vs. Mary Matalin. Better than Anjelica Huston taking revenge on Jack Nicholson. Better, maybe, than Hillary almost winning the White House after philandering Bill got impeached.

Bigelow, a still-stunning 58, is an artist known to not suffer fools. She studied painting at the San Francisco Art Institute, and went to Columbia Film School. Her movies include the surf-thriller “Point Break,” the action-adventure “K-19: The Widowmaker” and “Strange Days,” which Cameron produced.

“The Hurt Locker” is a story about an American marine tasked with defusing bombs in Iraq. It has made $16 million thus far for Summit, almost all of it domestically.

“Avatar” is Cameron’s latest magnum opus, in 3D, but he also deals with matters of war and the morality of American adventures in foreign lands. However, it stars 10-foot-tall blue people, and opens on Dec. 18.

Cameron, 55, is a visionary, and – arguably – a megalomaniac. He made a movie called “Titanic” and one or two others — something about a robot Terminator.