There are some celebrities that should never have been given a Twitter account. (You know who you are, John Mayer.)

There are others, however, for whom the 140-character limit is perfect for boozy, incoherent ravings.

Tracy Morgan is one of them.

Which is why some enterprising young Turks have launched a campaign to get the "Saturday Night Live" alum and "30 Rock" star on Twitter.

“Today in America, celebrities are tweeting the mundane details of their lives,” the mission statement reads. "Yet millions of children will go to bed not knowing everything Tracy Morgan has done.”

Morgan received his first Emmy nomination this year for his semi-autobiographical role as Tracy Jordan on “30 Rock,” eventually losing in the supporting actor category to Charlie Sheen’s “Two and a Half Men” co-star Jon Cryer. Wonder what Morgan would’ve tweeted at that moment.

“I’m just doing karate and trying to get females pregnant.”

(The "karate" comment comes in around the 4:00 minute mark.)

The Twacy.org campaign does not appear to be part of Random House’s viral marketing push for Morgan’s book, “I Am The New Black,” which is scheduled to be published on October 20, a week after the new season of “30 Rock” premieres.

Morgan helped create a series off-beat e-cards for major holidays and events. His Valentine's Day greeting? "My last girlfriend left me 'cause on Valentine's Day I got her Snickers and some grass." 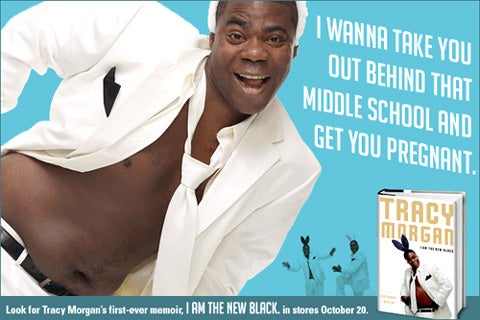 Click here for some of Random House’s Morgan e-cards, featuring more of his random musings.