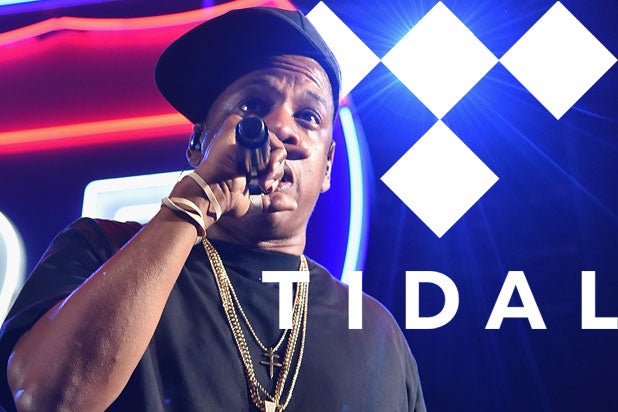 But with a deep-pocketed new competitor in the space, Tidal must move even more quickly to address those issues: attracting more listeners, developing a clear brand and convincing consumers of its unique features.

Apple Music launches June 30, but the news of its debut on Monday has already decimated the stock prices of its rivals (including Tidal’s parent, Aspiro, which is traded on the Stockholm Bourse).

Despite its late entry into the field, the Cupertino, California-based tech giant has clear advantages, including the popularity of its devices and a huge subscriber base (with banked credit cards) that eases the conversion of new customers. If you’re already in Apple’s system, a password is all you need to try out the new service.

In addition, Apple has a cool factor that rivals Jay Z’s. The highly visible defection of rapper Drake, who had signed on to Tidal but jumped ship and popped up at Apple’s Worldwide Developers Conference in San Francisco on Monday, could be seen as an embarrassing rebuke to Jay Z’s struggling service.

Notwithstanding the hoopla for Apple’s new service, Crupnik and other pundits noted that the challenges that exist for everyone in the streaming music space. “Apple’s announcement crystallized that it’s really difficult to create a music service that is dramatically different or any more compelling than any other — even Apple didn’t do that,” he said.

One obstacle is the very nature of streaming services — which have less cachet to the average consumer than products like Beats headphones or iPhones.

“Headphones are jewelry. The Apple watch is jewelry. It says something about you, it helps you show off. But with streaming services, no one really knows what you’re listening to. It’s like you can be reading on your Kindle and no one knows what book it is,” said Crupnick.

For Tidal, which Jay Z acquired Tidal for $56 million in March and billed it as a home for high-fidelity audio and exclusive content, a central thread of the marketing push was the roster of artist-owners like Rihanna, Kanye West, Madonna, Nicki Minaj, Jack White, Alicia Keys and Jay Z’s wife Beyoncé.

But as Crupnick noted, “Celebrity branding of a service is hard.”

Despite that fact, there are some signs of consumer loyalty — a phenomenon that doesn’t occur for other services like cable operators — which may make it harder to attract people to sample new music-streaming operations.

“When you ask people about Spotify and Pandora and YouTube, they say, ‘I am really happy with this,” he said. “I love the features on this. It’s not like we’re all going around saying, ‘Oh boy, I wish I had a new car that actually started in the morning.”

Tidal still has its fans. Artists liked that there was no free version of the site. Tidal’s catalog of songs are available in 31 global markets for either $9.99 or $19.99 a month. “Frankly, if I’m a relatively new performer and I deserve to be discovered then I deserve access to that platform,” Crupnick said.

And some consumers have been drawn to Tidal’s artist-centric content. “There’s a contingent out there that is really interested in artists’ videos and following artists,” Crupnik said. “Not a mainstream (service) but an imprint, a niche of music fans.”

But so far not enough of them. Last fall, Tidal’s parent company, Swedish technology firm Aspiro, said it had 512,000 users. Industry players now put the subscriber numbers for newly relaunched Tidal at about 800,000, but caution that includes many trials and free subscriptions.

Current projections suggest Tidal will be at about 500,000 paid subscribers at the end of 2015 (compared to Spotify’s 60 million total subscribers and 15 million paid).

In spite of Tidal’s rocky launch, Crupnik noted that the market for music streaming is growing, particularly overseas. “I think Tidal can hang on for a while,” he said.