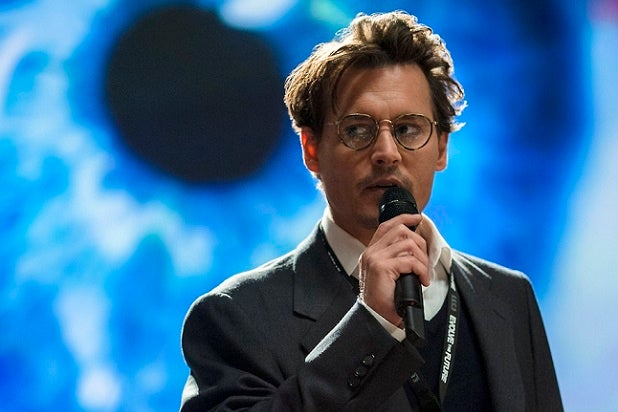 Johnny Depp‘s “Pirates of Caribbean” movies have made more than $3.7 billion at the box office, but it’s been three years since the star’s had a hit playing anyone other than Jack Sparrow.

He hopes to change that with this weekend’s “Transcendence,” the feature directorial debut of Oscar-winning cinematographer Wally Pfister. The sci-fi film about artificial intelligence is expected to battle “Captain America: The Winter Soldier” and the animated family film “Rio 2” for the top spot over the Easter weekend, with all three movies projected to take in around $20 million over the three days.

Analysts give a disembodied Depp and Fox’s singing parrots a slight edge over the Marvel sequel, which has held the No. 1 spot for the past two weekends.

See video: ‘Transcendence’ Review: Johnny Depp Is a Ghost in the Machine in This Bug-Riddled Techno-Thriller

“Heaven Is for Real,” which opened Wednesday, provides an X factor. The Sony drama, based on the Christian bestseller, stars Greg Kinnear as a pastor whose son claims he’s been to heaven. Tracking puts it at around $20 million over the five days, but its faith-based demographic is unpredictable — and few will be shocked if it over-performs.

There are two other wide openers, “A Haunted House 2” from Open Road Films and Disney’s “Bears.” The horror spoof sequel looks to land somewhere in the $15 million range, and the nature documentary is on course for a $7 million debut.

Depp’s last two outings — as Tonto in last summer’s “The Lone Ranger” and as Barnabas Collins in 2012’s “Dark Shadows” — were box-office disappointments. With production budgets of $225 million and $150 million respectively, neither of those were cheap. “The Rum Diaries,” which preceded those two films, cost $45 million and that one flopped, too.

Alcon Entertainment is hoping that their film, budgeted at $100 million, avoids a similar fate with the help of its impressive pedigree.

Christopher Nolan and his producing partner, wife Emma Thomas, executive produced Pfister’s directorial debut, having worked with the cinematographer on both the “Dark Knight” trilogy and “Inception.” In the film, Depp plays an artificial intelligence researcher whose cutting-edge experiments make him a target for anti-tech radicals. Morgan Freeman, Rebecca Hall, Paul Bettany, Kate Mara and Cole Hause co-star in the PG-13-thriller, written by newcomer Jack Peglan.

But the pre-release vital signs aren’t strong for “Transcendence.” It was screened somewhat late for critics, so there are only a few reviews and they haven’t been great. Audience interest seems to be low as well, with “Transcendence” failing to lead advance sales on MovieTickets.com on Wednesday. It’s also proven underwhelming on both Twitter and Facebook.

The film seems poised to find success overseas. It’s very possible that “Transcendence” could make more in China — one of a handful of foreign markets in which it’s opening this weekend- — than it does in the U.S. Last week, Depp visited Beijing and appeared in a nationwide prime-time TV broadcast to promote the film. And China’s DMG Entertainment, which is distributing the film in that country, will release it there in 3D.

“I think he’s become over-exposed in the U.S., not just in the movies, but because of the all the celeb coverage that he has no control over,” BoxOffice.com vice-president and senior analyst Phil Contrino told TheWrap.

“He’s made some questionable decision in terms of his movie choices, and you string a few of those together and you can hurt your good will.” That said, Contrino didn’t think the damage is irreversible.

“He’s such a big movie star that all it will take is one big role and he’ll be back,” Contrino said.

Depp has two major Disney projects in the works: “Through the Looking Glass,” a sequel to 2010’s billion-dollar-grosser, “Alice in Wonderland,” and the fifth “Pirates of the Caribbean” film — “Dead Men Tell No Tales” — set for 2016.

His immediate follow-ups will roll out much sooner. Kevin Smith’s horror film “Tusk,” the mystery thriller “London Fields” (with Amber Heard), Lionsgate’s crime drama “Mortdecai” and the comedy fantasy, “Into the Woods,” are all set for this fall. Depp is also set to play Whitey Bulger in the mob drama “Black Mass,” which is set for 2015.

Warner Bros. will have “Transcendence” in roughly 3,400 theaters in North America.

Jaime Pressley joins Marlon Wayans and Cedric the Entertainer in IM Global’s low-budget R-rated comedy “A Haunted House 2,” which Open Road Films is releasing. Michael Tiddes, who directed the original film, is back for the sequel.

Wayans and Rick Alvarez wrote the script, which has Malcolm (Wayans) taking up with his new girlfriend (Pressley). His ex (Essence Atkins) was killed off in the first film, but she comes back as a demonic spirit.

Also read: ‘Heaven Is for Real’ Review: Even Skeptics Can Find This Tale Humane and Even-Handed

There aren’t any reviews, advance tickets sales are soft and its social media indicators are mixed. It doesn’t have the Twitter buzz that the first film did, but it’s stronger on Facebook. Open Road will have it in roughly 2,310 theaters.

“Bears,” a G-rated documentary from Disneynature, will be in 1,600 theaters. It follows a family of grizzly bears living in the coastal mountains of Alaska. John C. Reilly narrates the film, from directors Alastair Fothergil and Keith Scholey.