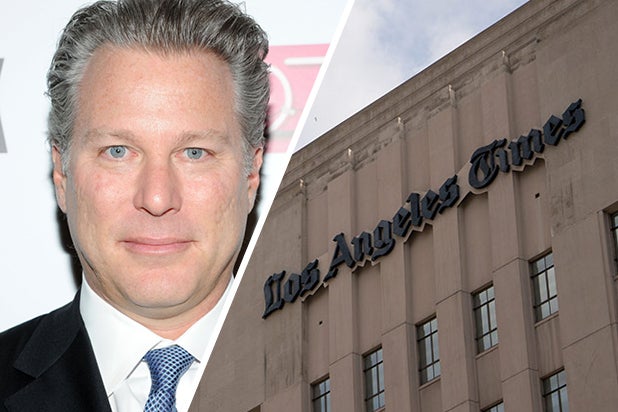 Ross Levinsohn, newly named as the publisher and CEO of the Los Angeles Times, is the latest executive to promise a turnaround of the long-declining newspaper, which has lurched from years of bankruptcy to new leadership that has so far failed to reverse its declining fortunes, even as competitors like the New York Times and Washington Post are thriving.

Michael Ferro, the swashbuckling tech millionaire who 18 months ago bought a controlling stake in Tribune and renamed it tronc — to widespread ridicule — has not yet delivered on a year-old promise to pivot the company to an aggressive video news strategy, or even make it a leader in digital news.

“This new structure will allow us to expand the reach of our great journalism and realize our business objectives, including elevating and better integrating digital processes that are critical for our future,” tronc CEO Justin Dearborn said in a memo to the newsroom on Monday.

However, it remains unclear what the digital strategy might be and whether Levinsohn has the wherewithal to change things.

Levinsohn, a media veteran, has plenty of experience: he went from News Corp, where he oversaw the acquisition of MySpace, to Yahoo, where he briefly served as interim chief executive ahead of Marissa Mayer, to Guggenheim Digital Media (owner of The Hollywood Reporter), where he was pushed out after a power struggle with chieftess Janice Min, and then to executive chairman of sports-focused portal Scout Media, the latter of which declared bankruptcy in December.

The Los Angeles Times and Levinsohn did not respond to multiple requests to comment for this story.

Scout’s downfall may not have any bearing on Levinsohn’s ability to succeed at the Times, but it shows the downside of what’s become a favored strategy for struggling print publications: the pivot to video. The paper is also suffering from low newsroom morale, anemic web traffic, a failure to stem the bleeding from the death of the print ad business and a declining stock price that may not give him tons of room to maneuver.

“You’ve got a publication that has been treading water at a moment when other big publishers have been pushing forward,” Gabriel Kahn, a professor at the University of Southern California’s Annenberg School of Communication and Journalism who follows the economics of the newspaper industry, told TheWrap. “Both in the content and the sources of revenue, particularly subscriptions.”

Tronc, the parent company of the Times, Chicago Tribune and several other papers, reported a 9 percent year-over-year dip in total revenue during the second quarter, with a 15 percent drop in ad revenue. Its digital division, troncX, saw its revenue slide 5 percent. Tronc’s stock is down 11 percent over the past 52 weeks, while shares of the New York Times are up 41 percent over that same period.

At the same time tronc has struggled to gain traction in the new news ecosystem, the New York Times has been able to build a thriving digital business, increasing total revenue by 9 percent year-over-year and grew its ad revenue less than 1 percent even as the print ad business continues to deteriorate. Digital ad revenue jumped 23 percent in the quarter, and it added nearly 100,000 digital-only subscribers year-over-year.

And even without subscriptions, the Los Angeles Times hasn’t been able to compete in terms of general web traffic. Its website is currently the 211th ranked site in the U.S. according to analytics firm Alexa, while the New York Times is ranked 31 and the Washington Post checks in at number 39.

Aside from his business directive, Levinsohn’s appointment also came with a complete beheading of the top editorial management team — including editor and publisher Davan Maharaj, managing editor Marc Duvoisin, deputy managing editor for digital Megan Garvey and assistant managing editor of investigations Matt Doig – giving the new boss few scapegoats if his approach fails to bear fruit. Former Chicago Sun-Times editor and publisher Jim Kirk was named interim editor, and he faces the separate task of improving morale in the newsroom, which multiple individuals have said is worse than it’s been in years, with one calling it “the escalating tronc s—show.”

The Times has had some recent journalistic successes, notably its expose on a former USC medical school dean who had been abusing drugs with prostitutes, but that hasn’t necessarily boosted its business fortunes. The USC investigation may, however, have played an important role in the departure of Maharaj and some of his top lieutenants Monday.

Multiple individuals in the newsroom told TheWrap there were complaints about a what looked like a slow-rolling of the story, which affected an important corporate partner. Maharaj’s perceived disrespect of female employees had also raised some eyebrows in the newsroom, other individuals said.

Complaints about the USC story and subsequent proposed editorial moves, such as a plan to transfer California editor Shelby Grad to a new beat, prompted a human resources investigation, individuals in the newsroom told TheWrap, which culminated in Monday’s editorial decapitation after numerous reporters expressed concerns with top brass.

“The investigation was related to the USC story and you see what happened,” an individual in the newsroom told TheWrap.

However, at least one individual in the newsroom, who is not a Maharaj supporter, said an initial edit of the story had several issues that contributed to the delay.

In a seemingly unrelated move, managing editor Larry Ingrassia also announced his intent to retire over the weekend, which further depletes the paper’s bench of experienced editors as it enters a new era.

Levinsohn also has to try to fulfill the futuristic promise Ferro and tronc’s second-largest shareholder Dr. Patrick Soon-Shiong (who has since had a falling out with Ferro), made last year, when they pledged to use machine-learning technology to power the venerable publication into the digital age, publishing thousands of videos a day.

But that machine-learning revolution has failed to materialize, and in fact, the newspaper remains hamstrung by old technology, including an archaic content-management system, two individuals with knowledge of the newsroom told TheWrap. Rather than become a digital leader itself, in March, Tronc signed on to use the Washington Post’s content-management system, Arc, which one of those individuals said is finally being implemented.

“Plenty of people here have been very frustrated with the systems,” one individual told TheWrap.

But Kahn thinks there’s still plenty of potential at the Times for Levinsohn to tap if he can deliver what the digital audience really wants — something worth subscribing to, not auto-play video.

“The Los Angeles Times has a tremendous opportunity,” Kahn said. “They are the biggest and most developed newsgathering operation in California. That’s a big card to play.”