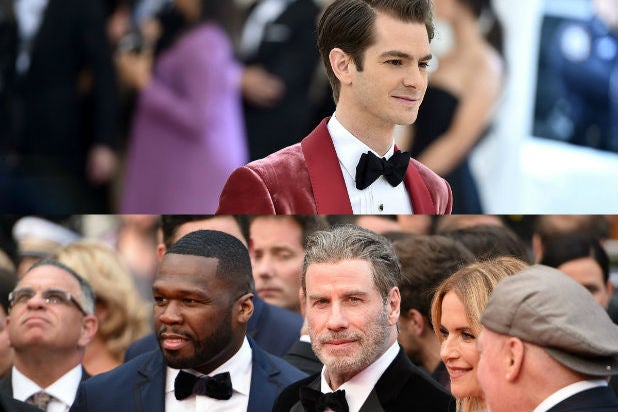 Cannes is settling down after a flurry of early-week activity thanks to theater walkouts and the outspoken Spike Lee.

Tuesday night premieres led to Wednesday reflections on the competition films, as there was no giant wookiee on the red carpet to distract reporters and industry types from their duties.

David Robert Mitchell’s “Under the Silver Lake” premiered to mixed reviews, which puts star Andrew Garfield in a familiar position. But the response to actor-director Kevin Connolly’s “Gotti” with John Travolta was about as glaring as a neon “Bada Bing!” sign.

As Spider-Man, Garfield has stated many times how unenjoyable the commercial Hollywood machine became for him. He’s since been playing in Broadway’s sandbox and, while awards campaigning for 2016’s “Silence,” shot the hipster mystery “Under the Silver Lake” with director David Robert Mitchell.

“A movie made for Hollywood strivers who feel so close to cracking the code yet deep down, know their dreams will remain forever out of reach,” wrote Vulture’s Kyle Buchanan of the Cannes selection.

“It’s also a movie made for people who love Andrew Garfield’s butt,” he added.

TheWrap’s Ben Croll dubbed the film “‘Ready Stoner One,’ as it wrangles a rather overwhelming compendium of references, easter eggs and winks to some of the foundational texts of contemporary millennial culture and offers them as clues in a Galaxy Brain conspiracy.”

Garfield plays Eastside slacker Sam, who sets off to solve several mysteries surrounding a pouty neighbor girl (Riley Keough) he is fond of — pulling in many local references like the dog overpopulation in L.A.’s  crunchy Silver Lake neighborhood (the pups are targeted by a serial killer, if that gives you any idea of how Mitchell feels about the area), parking tickets and missing venture capitalists.

“I might have liked that more in a world where Paul Thomas Anderson & David Lynch didn’t already exist,” tweeted the critic for The Village Voice.

“Silly-minded plunge into the overstimulated male psyche, yet also a pure form exercise in sexual frustration,” wrote another user.

A24 (of course!) will release the film stateside.

“Even John Gotti deserved better,” tweeted IndieWire critic David Ehrlich, who applauded “the courage that must have been required to unveil it at Cannes, where it surfaced alongside a tribute to Travolta designed to look back on better roles.”

“It’s not only that the film is pretty terrible: poorly written, devoid of tension, ridiculous in spots and just plain dull in others. But the fact that it mostly portrays John Gotti as a loving family man and altogether likable guy,” wrote THR.

Travolta was undeterred by the response at a festival spotlight talk on Wednesday. A moderator brought up his Hollywood superpower — to come back after significant flops — to which Travolta simply replied, “I don’t feel like I’ve ever gone anywhere.”

The crime drama grapples with the American dream and serves as a follow-up to Arcand’s 1986 film “The Decline of the American Empire.”

The deal was negotiated by Anick Poirier from Seville International, an eOne company, and Denise Robert from Cinemaginaire.