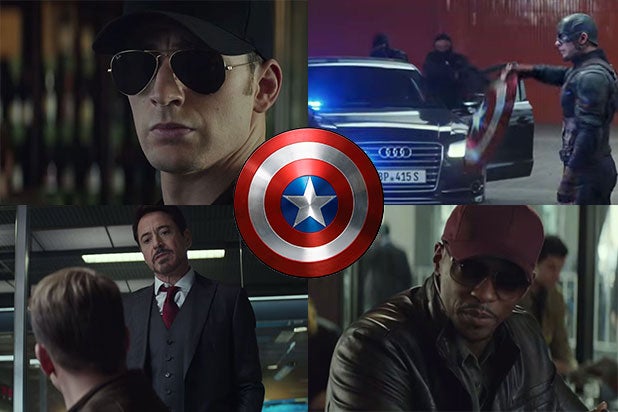 Sure, “Captain America: Civil War” sets Marvel’s Avengers against each other — but all is harmonious with filmmakers and brands featured prominently in this Friday’s release.

“Civil War” marks the 13th film in the modern Marvel Cinematic Universe, which offer marketers the closest thing to a safe bet.

What’s notable about product placement in a movie like “Civil War” is the meaningful way the brands are deployed. Take 98-year-old Captain America, who’s cellphone use creates a powerful halo effect.

“Look at him in the last movie — he’s so old school, he makes his notes on a notepad with a pen,” Bertolina said. “Being the gadget in his hand would be a great place to be for any brand.”

In a scene that introduced Tom Holland’s new take on Spider-Man, we see a vintage Macintosh sitting on his desk, rescued from the garbage. There’s no hipster novelty here — Peter Parker knows how to turn trash into treasure.

“What’s great about the Avengers and these characters is that you identify with them not just for their abilities but who they are,” Bertolina said. “It makes them that much more powerful than their hero alter egos.”

Electronics
• Vivo V3 Max smartphone: The gadget company is the coveted brand in Captain America’s hand. The subliminal value of that specific placement is significant — Evans’ hero is 98 and not the most adaptive to modern conveniences.

Cars
• Audi: A longtime partner of the MCU, Audi provides show slick vehicles to chauffeur diplomatic types and chase bad guys in bigger chase scenes. Directors Joe and Anthony Russo even shot a short promotional film (above) featuring an Audi-driving family who get caught in the middle of an epic chase between Captain America, the Winter Soldier and Black Panther.
• Volkswagen: Cap, Falcon (Anthony Mackie) and Bucky Barnes (Sebastian Stan) cruise around in a vintage VW. Look out for a cute laugh when Falcon refuses to move his seat for Bucky’s comfort.

Fashion
• Tom Ford: The iconic fashion designer pops up (and even gets an onscreen shout-out) on the back of Downey’s Tony Stark. Ford is the man that suits up James Bond himself.
• Lids / Flexfit by Yupoong: Captain America and Falcon wear these baseball caps, respectively, giving slick cred to the brands.
• Ray-Ban Sunglasses: The legendary Aviators pop up on Cap’s face, though one individual familiar with the movie’s product placement said Ray-Ban didn’t pay to be included. The costume choice makes sense — Steve Rogers is a WWII pilot, after all.