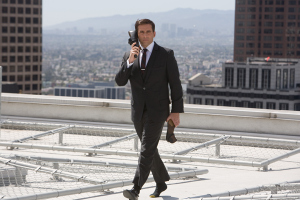 Steve Carell ought to check his media profile: no matter how well "Get Smart" did this weekend, the guy is dangerously close to overexposed. Between "The Office," the advertising glut on "Get Smart," the DVD for "Evan Almighty" and the media lovefest that surrounds him, there’s only so much Steve Carell that anyone can take. (Here’s a list of full appearances, for the record.) The billboards, all those magazine covers, and long take outs about him – wh ere’s the story? Nice guy, married, stable, success at 40. Dullll. Give me a post-rehab, box-office comeback over that any day: Calling Robert Downey Jr.  Carell seems to feel this instinctively; he actually looked embarrassed when he appeared on his pal Jon Stewart’s show last week, and seemed bored with himself on the David Letterman Show.  True, there was nothing embarrassing about the box office performance of "Get Smart," which took in $39 million. But I’ve said it before: the box office figures can lie. Movie stars who indulge in every available spotlight do so at their peril. 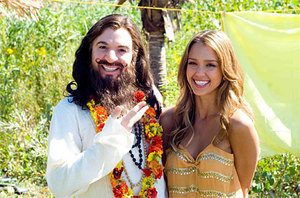 Mike Myers, on the other hand, just seems desperate, past his prime, and out of touch. During his visit with Stewart the day after Carell, he appeared positively medicated. The comic actor lay half-prostrate on the desk for much of the time, and made serial references to "peepee from his bumbum," displaying an apparent obsession with diarrhea that goes back to Austin Powers and may have met its apotheosis in "The Love Guru." Despite clever trailers and marketing, the negative word of mouth found its way to the box office, where the $62 million budget movie, dismissed by critics as a series of unfunny sketches, sucked in just $14 million. Myers made a big deal of the years he invested in creating his new character, Pitka. And indeed, it’s been a decade since Austin Powers first came to delight audiences. In the meantime his reputation for diva-not-guru-like pomposity precedes him. If this is the best he can do in all that time, perhaps Myers should switch gears to something more in keeping with his gastro-intestinal obsessions. How about as a pitchman for Pepto-Bismol?