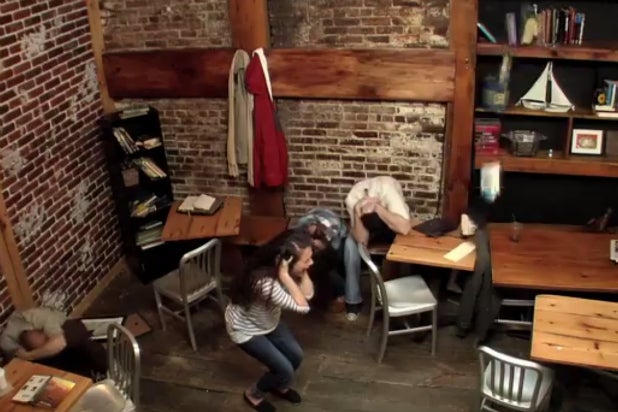 If the “Carrie” remake is half as good as its latest marketing ploy, it may make for some frightening — and very cool — cinema.

A promotional video for the upcoming thriller, uploaded Monday, is heading toward viral status. The two-minute, 23-second clip depicts an angry coffee shop patron going all telekinetic on a man who accidentally spilled coffee on her laptop, scaring the hell out of regular customers in the process.

Also read: Screen Gems Gets Paws on Comedy ‘Catfight’ for Will Gluck to Produce (Exclusive)

The woman with the power of brain control and a piercing scream was actually an actress; her victim, a stuntman. The elaborate prank included a faux wall, some remote controlled tables and chairs, and a number of wasted café lattes.

The studio behind “Carrie,” Sony’s Screen Gems, is obviously hopeful that the video will drum up more customers for the film. The coffee shop itself will be lucky to get any repeat business from the bystanders.