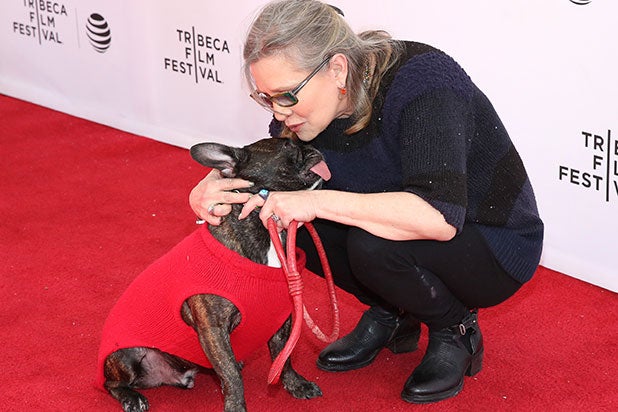 Admittedly, that “child” is her French bulldog, Gary, but that didn’t stop the “Star Wars” actress’ oldest daughter, Billie Lourd, from throwing him blowout bash.

The adorable video accompanying the birthday greeting showed Gary and Lourd — complete with animated dog ears and nose — doing the exact same tongue-out action, to the theme song of Aha’s 80s hit, “Take on Me.”

Gary was re-homed with Lourd after Fisher died on Dec. 27, 2016, after suffering from cardiac arrest on a flight from London to Los Angeles.

The Princess Leia actress’ death came just one day before that of her 84-year-old mother, “Singin’ in the Rain” star Debbie Reynolds, also passed away.

Fisher, who was diagnosed with bipolar disorder, adopted Gary more than three years ago to settle her nerves. The service dog went on to accompany her on red carpets and sat-in for countless on-camera interviews, quickly turning him into a fan-favorite.

It’s good to see he now has a good home — and is having a helluva birthday party with Lourd and her other French bulldog, Tina.