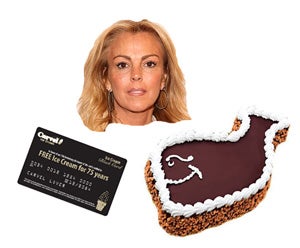 Nothing like a free ice cream scandal involving a Lohan to end the work week.

Dina Lohan has been slapped by Carvel, the ice cream chain famous for its Fudgie the Whale cake, over her alleged abuse of a special black card the store issued to Lindsay and her sister Ali.

Following an incident on Long Island in which Dina reportedly called the cops after a store manager tried to confiscate the card, Carvel released a relatively lengthy statement scolding the Lohan family for abusing the “free ice cream for 75 years” privilege entitled to cardholders.

Their message to the Lohans: scram!

As part of Carvel’s 75th Anniversary celebration last year, we issued 75 Black Cards to celebrities.  These cards were issued in the celebrity’s name and require the card holder to be present at the time of use. Many celebrities have enjoyed their cards at our Carvel Ice Cream shoppes and have shared their excitement with being included in the celebration.

Unfortunately, the Lohan family has been abusing the card.   While the card was issued in Lindsay and Ali’s names only, their extended family has repeatedly used the card without either present.   At first, we graciously honored their requests while explaining that the Black Card was not a carte blanche for unlimited Carvel Ice Cream for the extended Lohan family and friends.  After more than six months of numerous and large orders for ice cream, we finally had to cut off the card and take it back.

Dina Lohan reacted badly and called the police to have her card returned.  The police responded and did return the card to Dina with instructions not to use it again.

This is an unfortunate situation where certain people feel entitled to use a celebrity’s name for their own purposes.  We regret that the Lohan family is upset and hope this matter is put behind us quickly.