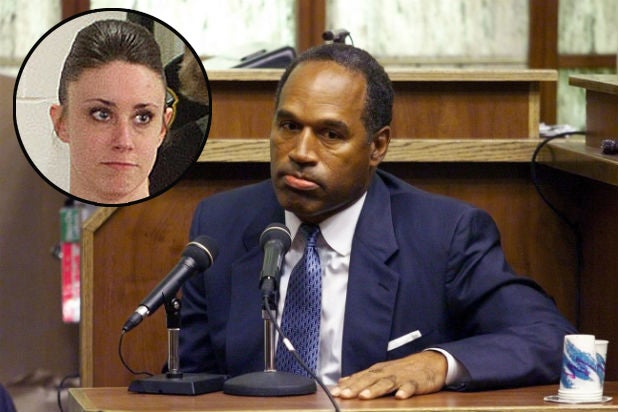 Not many people can relate with O.J. Simpson, but fellow acquitted murder suspect Casey Anthony believes her life story shares a lot of similarities with the football star-turned double murder suspect.

“I can empathize with his situation,” she told the Associated Press, saying there are “a lot of parallels” to her own circumstances.

Anthony’s connection to Simpson goes even deeper than what she’s read in the news or seen on TV — she currently lives in the South Florida home of private detective Patrick McKenna, who was the lead investigator on her defense team, and she does online social media searches and investigative work for him.

As it turns out, McKenna was also the lead investigator for Simpson, when he was accused of  the brutal 1994 murders of Nicole Brown Simpson and Ron Goldman.

Anthony, now 30, was at the center of another notorious murder case following the disappearance of her two-year-old daughter, Caylee. On Dec. 11, 2008, the toddler’s skeletal remains were found with a blanket inside a trash bag in a wooded area near the family home, and she was subsequently charged with first-degree murder.

While the prosecution sought the death penalty, Anthony denied killing her daughter and was found not guilty — a verdict that sparked public outrage and led to personal and media attacks on the Orlando, Florida, native.

“Caylee would be 12 right now. And would be a total badass,” Anthony told the AP in her first major interview since the blockbuster trial that captivated TV viewers in the summer of 2011.

“I’d like to think she’d be listening to classic rock, playing sports” and putting up with no nonsense,” she added.

As for being dubbed “the most hated mom in America,” and “tot mom” (most notably by HLN’s Nancy Grace, “Based off what was in the media … I understand the reasons people feel about me. I understand why people have the opinions that they do,” she said.

As for what people think about her now?

“I don’t give a s— about what anyone thinks about me, I never will,” Anthony said. “I’m OK with myself, I sleep pretty good at night.”