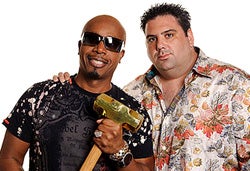 Cash4Gold, a company that promises “top dollar” for your unwanted jewelry, is suing  Consumerist.com, a blog formerly owned by Gawker Media, for linking to and excerpting a message board post written by a former employee which included “confidential, proprietary information, and any defamatory information.”

The blog ran the post in February, as part of its own investigation of the Florida-based company, including allegations that the “World’s #1 Gold Buyer” offered cash to bloggers in an effort to silence them.

Cash4Gold, also known as Green Bullion Financial Services, LLC, filed suit against the employee, Michele Liberis, in a Broward County court in March. The Consumerist was added to the suit in August.

The Consumerist responded with a 3,849-word investigative blog post on Tuesday, outlining the ins, outs and what-have-yous from their side of the story. (The article already has nearly 200,000 page views and more than 4,000 Diggs.)

“We believe citizens, consumers, and employees should be able to exercise their free-speech rights online – and journalists should be able to report on those efforts – without fear of intimidation,” a post on the Consumerist reads. “That belief is at the core of what makes Consumerist tick. And it’s what keeps the internet from being just a brochure with hyperlinks.”

The site, launched by Gawker in 2005, was acquired by the Consumers Union – the non-profit company that publishes Consumer Reports – in 2008.

The Consumerist noted that it isn’t the only media outlet to publish critical articles about Cash4Gold. In February, the Los Angeles Times published a report titled "Beneath Cash4Gold.com’s shiny veneer, a dull reality"; Yahoo! Tech warned its readers, too.

To this point, though, the blog is the only media company cited in Cash4Gold’s lawsuit.