The passing of longtime Hollywood manager Cathryn Jaymes to cancer is a shock. I met her during the reporting of “Rebels on the Backlot,” and like just about everyone else who knew her, fell in love with her sweet demeanor. 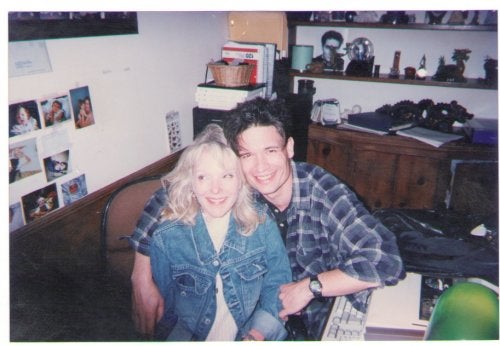 But few know the backstory and post-story of her traumatic relationship with Quentin Tarantino.

Jaymes was just 60 when she died on Wednesday, and she had been suffering from lung cancer for months, which – due to her not having health care – went inadequately treated until it had metastasized.

I hate our health-care system.

Back to the backstory: When I met Cathryn, I could hardly believe this was the person who represented the cinematic king of the N-word, Quentin Tarantino. Initially, she represented him, Roger Avary and Craig Hamann (in a recent picture with Cathryn, left). Hamann, who started as her assistant, had brought his friend Tarantino to her office (the two worked at Video Archives together, and made "My Best Friend’s Birthday" together).

Jaymes was charmed. For a time she played den mother to the trio, and they were an inseparable clique.

In "Rebels," I describe her thus:

“Jaymes was a cornfed Midwesterner and the daughter of a Presbyterian minister, a petite, beautiful blond who had spent years surfing off the coast of Mexico and Central America before drifting into Hollywood. She never cared. ‘When I go,’ she once said, ‘I know I’ll have done my best to be kind to people and to be fair and honest in my business.’

“… Jaymes was single, took in housefuls of stray cats, and used words like ‘Jiminy Christmas’ and ‘goldarn’ instead of the foul language spouted by Tarantino and his friends. She found herself fighting for a client who – apart from bathing only rarely – seemed to use the word f— in every other sentence.

(Here’s the video of ‘My Best Friend’s Birthday,’ which became ‘True Romance’)

“She became a true evangelist for him. Jaymes called agents, producers and executives, dropping in on them and insisting they read Tarantino’s scripts … Jaymes sent the script for ‘True Romance’ to Chris Lee, who ran feature production at Tristar. ‘He sent me a form letter back, saying this is really not for me,’ she recalled. Later, when Tarantino became the hot thing, Lee called and demanded to know why she hadn’t brought him to his attention. ‘I said, ‘You were the first person I called. You were lame enough not to take a chance …’

“Later Mike Medavoy, then head of Columbia, pulled Jaymes into his office while Tarantino was writing ‘Pulp Fiction.’ ‘He’d stare at me, focus on me, and say, ‘Okay, Cathy, tell me this is going to be commercial.’ She responded, ‘I can’t tell you that, Mike. But whatever it is, it’ll be remarkable. And you better say yes.’

“Not everyone to whom she showed the scripts agreed. Some agents were so offended by Tarantino’s language that they told Jaymes they would stop reading her submissions. One time she got a letter back from an agent that read, ‘I’m returning your f—ing submission. I hope you have a f—ing great day.”

Although many knew that Tarantino fired Jaymes abruptly on the brink of his greatest success with "Pulp Fiction" (a story I recount in “Rebels on the Backlot”), few knew that she contracted virulent breast cancer in the year or so after her brutal separation from the director.

She chose to have a radical mastectomy but slowly bowed out of the business. I know that Cathryn believed, and it didn’t take much to convince me, that what she considered a shocking betrayal by Tarantino contributed to her illness.

I chose not to mention the illness in the book, but there is no doubt that the end of this relationship fundamentally shook her trust in people and struck hard at her core, personal values.

But they were two different kinds of people, it seemed. The story in ‘Rebels’ of Tarantino firing Jaymes has become kind of famous. It happened just before Jan. 17, 1994, when a 6.7 earthquake hit the San Fernando Valley. Jaymes refrigerator had crashed through her kitchen window.

I write: “Jaymes was sitting amid the rubble of her living room in Studio City when the phone rang. It was Quentin Tarantino. She braced herself; three days earlier Tarantin’s business manager, Mark Friedman – whom she’d hired – had called to peremptorily fire her after 10 years of managing Tarantino’s career….

‘I’m calling to ask you a favor,’ said Tarantino.

"’How dare you?’ demanded Jaymes. ‘You just fired me. No more favors. And in case you hadn’t noticed, there’s been an earthquake.’

"He attempted conciliation. ‘I want you to know you were a terrific manager. I appreciate it. But your job is done. I don’t need you anymore.’ He paused. ‘You know I”ve always been selfish. I don’t need to pay a manager anymore, I have an agent. I am not going to get another manager. Look, I can get kings and queens on the phones now. I don’t need you. What makes you think I’d stay with you anyway?’

"Jaymes was stunned. ‘Because you promised you would,’ she said.“ (The full story is in the book, which I highly recommend, naturally.)

But the other thing to know about Cathryn is that however hurt she was, she never ceased being a champion for Tarantino’s talent.  I interviewed her in the post-"Pulp" death valley where he produced nothing at all for years. (Easy to forget this now, in a season where Tarantino is again being celebrated as a genius and on a day when the Directors Guild recognized him with a nomination for his striking work in “Inglourious Basterds.”)

She was willing to talk, but always concerned that I make clear that she persisted in believing that he was a unique talent, a genius – but a flawed human being. And she forgave him – because she was that kind of person.