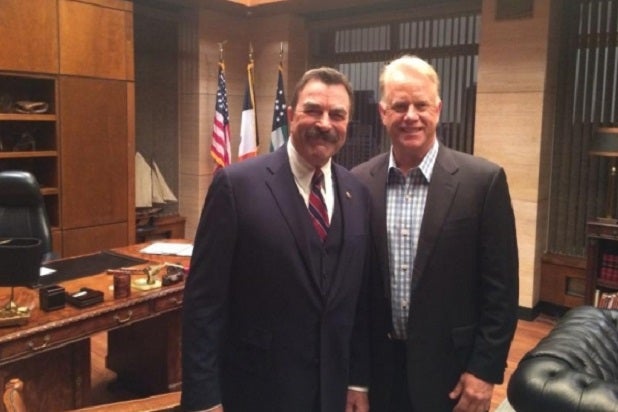 Are you ready for some football … on “NCIS” and “Elementary”?

Gonzalez, who serves as an analyst for CBS’s “The NFL Today” and will contribute to the network’s inaugural coverage of “Thursday Night Football,” will guest on the Sept. 30 episode of “NCIS.” He’ll play Special Agent Tony Francis, who fishes for information on Special Agent Leroy Jethro Gibbs (played by Mark Harmon).

Fellow “The NFL Today” analyst Esiason will check in at “Blue Bloods” for the Oct. 3 episode. Playing himself, Esiason (pictured above with series star Tom Selleck) will pay a visit to Commissioner Frank Reagan (Selleck) to thank him for his work with the Women and Kids Fundraiser, and to make a request that will be difficult to grant.

Dickerson’s appearance on “Hawaii Five-0,” airing Oct. 31, will find the NFL Hall of Fame inductee playing himself. The episode will feature Alex O’Loughlin‘s McGarrett character running into Dickerson at a bait shop and taking a selfie with him, spurring jealousy in Danno (Scott McCann).

Simms will pop up on the Nov. 13 episode of “Elementary,” playing himself as an associate of Jonny Lee Miller‘s Sherlock who has a surprising, little-known talent. The talent will not likely involve throwing a football, as Simms’ aptitude with that is already pretty well-known.