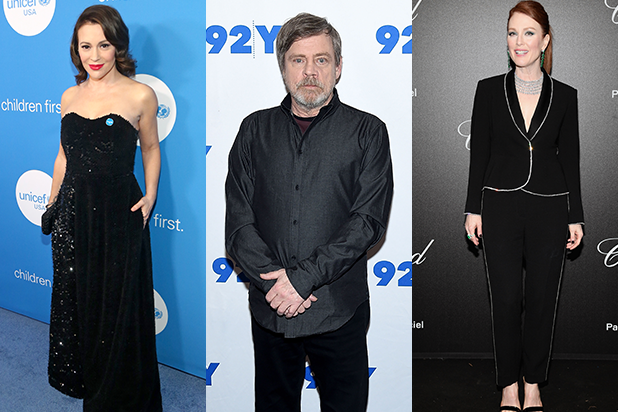 Why orange? It’s the color that Hadiya Pendleton‘s friends wore after the 15-year-old was shot and killed in Chicago in 2013, just one week after performing at Barack Obama’s second inaugural parade. Since Pendleton’s death, orange has become the color of the gun violence prevention movement.

Gun Violence Awareness Day acts as the kick off to Wear Orange Weekend, which includes rallies, marches, and other events across the country.

On Friday, a number of celebrities tweeted and shared photos on Instagram to show their support and encouraged others to wear orange in support of gun violence prevention. In 2018, more than 5,000 people in the United States have died from gun violence, and there have been more than 100 mass shooting incidents, according to the Gun Violence Archive.

Here are some of the celebrities and politicians wearing orange Friday.

Let's all #WearOrange for #NationalGunViolenceAwarenessDay honoring the 96 Americans killed every day w/ a gun & the 100's more injured-Thanks to @tomtomorrow for turning my #UglyBlueSweater a beautiful ORANGE! Check out others at https://t.co/2bY176vNAP pic.twitter.com/gzXtqMe5AV

I #WearOrange because I beleive that every American has the responsibility to change our culture and work to end gun violence. I wear orange to honor the lives that have been senselessly lost and to call attention to government inaction. Join me Text ORANGE to 644-33 @Everytown pic.twitter.com/6S1HCkB4R9

It’s #NationalGunViolenceAwarenessDay & I #WearOrange because 96 people are shot and killed in an average day in America & for every 1 person killed with guns, 2 more are injured. As 9-year-old Yolanda Renee King said @ #marchforourlives, “I have a dream that enough is enough.” pic.twitter.com/6tsTIDptGW

This is Xavier Monroe. He was shot & killed while hanging out at a bar with his friends. Black men like Xavier are 13 times more likely than white men to be shot and killed with guns. I #WearOrange for Black men in America who have to live with the threat of gun violence. #NoRA pic.twitter.com/JKzmiZ0pTN

Today, I #WearOrange to give a voice to the 96 Americans who die and the hundreds more who are injured by gun violence every day. Why do you #WearOrange?

Text ORANGE to 644-33 to find a #WearOrange Weekend event near you. @Everytown ???? pic.twitter.com/4rvHWWFp6p

Today I #WearOrange to honor the victims of gun violence. We need common sense gun laws NOW! Text ORANGE to 644-33 and join the fight! @Everytown pic.twitter.com/bXqV9KLckq

Today, I #WearOrange to give a voice to the 96 Americans who die, and the hundreds more who are injured, by gun violence every single day.
Text ORANGE to 644-33 to find a #WearOrange Weekend event near you. @Everytown pic.twitter.com/NyQTbIqClI

I #WearOrange today to support the millions of Americans standing with @Everytown and @MomsDemand to support common-sense solutions to end gun violence. pic.twitter.com/K639wDuxGM

Hadiya Pendleton was only 15 years old when she was shot and killed outside her school in Chicago. I #WearOrange today for Hadiya, for the 96 Americans who die every day from gun violence, and most importantly, to imagine a nation where we don’t accept this as normal. pic.twitter.com/kBs4UWKaOd

Too many American children will never have the opportunity to realize their dreams because their lives were cut short by a bullet. Our kids deserve to live free from the threat of gun violence. #WearOrange @Everytown @MomsDemand pic.twitter.com/SjacOKPgVv

Tomorrow I'm wearing orange because I am a mom and want safety for the kids in our country. Let's give a voice to those who are impacted by gun violence every day. #wearorange @everytown @momsdemand pic.twitter.com/rQlDeE3vz4

June 1 is #NationalGunViolenceAwarenessDay
Are you ready to #WearOrange?

To find a Wear Orange Weekend event near you, text ORANGE to 644-33 pic.twitter.com/ECtdiwcXoc