I wrote an honest, funny, yet somewhat snarky blog about Ryan Seacrest on Wednesday, and boy did I get some feedback!

Some people wrote to defend Seacrest, but overall people agreed with my take.

I asked the question: What is the appeal of Ryan Seacrest? No one could tell me. In fact, nobody even tried to answer the question. It would appear that there is no explanation as to why this man is so successful.

One person accused me of being harsh, a hater, a homophobe and just plain mean. Luckily, I live in America, and am allowed to not only have an opinion, but also voice it. 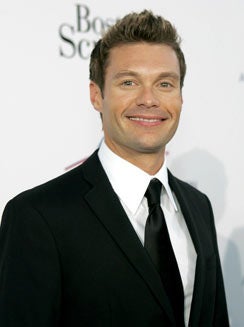 Ryan, perhaps I owe you and your fan(s), an explanation. My decision to blog about you at all came from the “joke” you made about Brian Dunkleman on Tuesday night. Was that really necessary, Ryan?

"American Idol" was a huge success from the moment it launched. The hit it became that first year can be attributed to Brian as much as it is to you. Regardless of why he was dumped, that joke made you look like an ass, Ryan.

I happen to think you suck on television. It’s just my opinion. That said, you are brilliant at other things. "Jamie Oliver’s Food Revolution" is not only fascinating to watch, but will change America in a profound way.

I am also hooked on "Keeping Up With the Kardashians." That I have any interest at all in watching a group of girls who are famous mainly for having a beautiful sister is a tribute to you and your producing mind.

I also believe you are brilliant on the radio. I listen to "American Top 40," listen to you when I drive my kid to school, and think "Ryan’s Roses" is perfection. I get you on the radio, sweetie; it is you on television that I struggle with.

You’re mean on "American Idol," Ryan. You weren’t in the beginning, but you are now. Not only are you mean, but you are unfunny, rude, obnoxious and full of yourself. Again, just my opinion.

As for the whole sexuality thing, it’s none of my business, and I apologize if I offended anyone. You are free to do whatever you want and love whomever you want. Just like all of America, Ricky Martin included.

Let’s have lunch, Ryan. We can talk about your career, "American Idol," your dating life, your mom, your clothes, your hair, your teeth, the Kardashian clan and school lunches. I dare you.

I’m curious to hear your take on the Dunkleman joke, and how you feel about bloggers who’ve never met you sharing their opinions, which are based on television and gossip, not first-hand knowledge of you.

It will be fun. I’m harmless. You can bring your “people.”

Maybe I’m wrong about you. But if I am, you are the only person on the planet who can change my mind. Care to give it a try?

You have been blogging gold for the past couple of days, Ryan. I’m here, as a blogger who has been critical of you, to invite you to talk. Let’s clear up all the gossip and have a chat. Don’t be scared.