Lenny Kravitz made waves on Wednesday afternoon when he posted a thirst trap to his Instagram. In the photo, a sun-soaked, sunglasses-wearing 57-year-old (!) stands in his kitchen, coffee pot in hand, giraffe print blouse unbuttoned to reveal his washboard abs. The caption coolly reads, “2:37pm. Good morning. All nighter in the studio last night. 3 albums on the horizon. Going back in. Love.”

Channing Tatum, whose own impressive build has graced films like “Magic Mike XXL,” “Step Up,” and “21 Jump Street,” was evidently blown away by the rocker’s rock-hard bod. “Good god man!” he commented. “What are you eating or what’s in the water or the genes. It’s not natural. Do you just do abs like all day?”

Kravitz volleyed back with a sly response: “Dude, I’m just trying to get in the next Magic Mike. Any connections ?” Judging by the number of enthusiastic replies to the comment, Kravitz isn’t the only person who’d like to see that happen.

Not to be outdone by Tatum, a slew of verified admirers swung by the comment section to drop their own compliments. Model Winnie Harlow fanned the flames with four fire emojis, while actress D’Arcy Carden simply wrote “Leonard.” Arsenio Hall jokingly wrote, “I hate when my friends hack a photo and put their head … on my body! #comeonfam,” prompting an apology from Kravitz. Even Dwayne “The Rock” Johnson and Alex “A-Rod” Rodriguez – no strangers to the gym themselves – popped by to praise Kravitz’s “inspiring” figure.

In August, Tatum wrapped filming on the romantic comedy “The Lost City of D” which co-stars Sandra Bullock. The film is slated for release in April 22. Meanwhile, Kravitz seems to be hard at work on new music. If the stars align, maybe these two will share the screen one day – and get the chance to go ab-to-ab.

And yeah, we’re down for “Magic Mike 3” with Lenny and Channing! 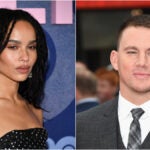