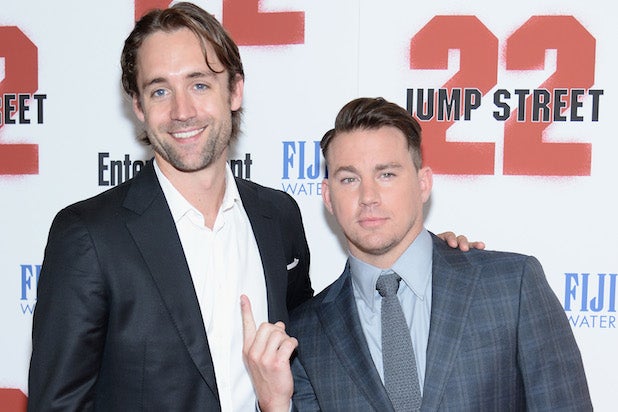 Peter Kiernan has joined Channing Tatum and Reid Carolin as a partner in their newly-renamed production company Free Association.

Most recently a partner and board member at Management 360, Kiernan has co-managed Tatum and Carolin with William Choi for over a decade. In his new role at Free Association, Kiernan will oversee the day-to-day operations of the company while working with Tatum and Carolin to further diversify and grow their already established production slate.

Tatum, Carolin and Free Association will continue to be repped by Choi, Darin Friedman and others at Management 360.

“We are thrilled for Peter. He’s been an integral part of 360 since its inception,” the Management 360 board said in a statement. “Bill and Peter have led the Tatum/Carolin team here at 360 for many years. Now Peter will help Channing and Reid take Free Association to a new level and Bill, Darin and all of us at 360 are looking forward to working alongside Peter in his new role. We are also thrilled for Channing and Reid as this next phase of their production company is the realization of lots of hard work and many bold choices.”

Free Association has a robust and ambitious slate of projects ahead of them, as their feature development deal at Sony has them working on “Evel,” the biopic of Evel Knievel, which is being written by Carolin with Tatum set to star. Mike De Luca and Dana Brunetti are producing with Free Association.

“Lodi” is another top priority for them at Sony. It is the true story of Lou Peters, a small town Cadillac dealer and family man who goes undercover to take down a mob boss. This project will be co-produced with Neil Meron and Craig Zadan.

Free Association recently signed a deal with MRC for television as well.  On the TV side, they will look to build upon their emerging brand and established relationships with talent.

At Warner Bros., Free Association has the sequel to “Magic Mike,” currently being written by Carolin with a fall start date. Greg Jacobs is directing and the release date is set for June 26, 2015. Additionally, the company is adapting and producing an adaptation of Jo Nesbo’s bestselling crime thriller “The Son.”

“Chan, Reid, Bill and I have grown up together in this business and we are brothers,” Kiernan said. “We have shared a common vision for over a decade and this new partnership feels like a natural evolution. The colleagues and clients I have had the pleasure to work with at 360 mean everything to me. I look forward to working with Bill and the rest of my 360 family to build this new venture.”

“We’re extraordinarily lucky to have the chance to partner with PK. He and Bill’s guidance, support, and taste have been integral to our journey over the past decade, and we couldn’t be more excited to watch Peter bring his invaluable skillset to producing,” Tatum and Carolin said in a joint statement.

Kiernan has been a manager at Management 360 since its inception in 2002. Prior to that, he was a manager at More-Medavoy and Talent Entertainment Group. He became a partner in 2010 and was inducted to the Board in 2013.

Tatum, who currently stars in “22 Jump Street,” will soon be seen alongside Mark Ruffalo and Steve Carell in Bennett Miller’s “Foxcatcher,” which Sony Pictures Classics will release on November 11. Later in the year, Tatum will lend his voice to Fox’s animated film “Book of Life.”

Reid Carolin is a Peabody Award-winning producer and screenwriter. His first produced feature screenplay, “Magic Mike,” went on to gross $167 million worldwide. In additional to the “Jump Street” franchise, his producing credits include “White House Down,” “Ten Year,” “Stop Loss” and HBO’s “Earth Made of Glass,” a documentary Carolin wrote chronicling the search for truth in post genocide Rwanda which won a Peabody Award and was nominated for Best Documentary at the 2011 Producer’s Guild Awards.

Tatum, Carolin and Free Association will also continue to be represented by UTA and Hansen, Jacobson.