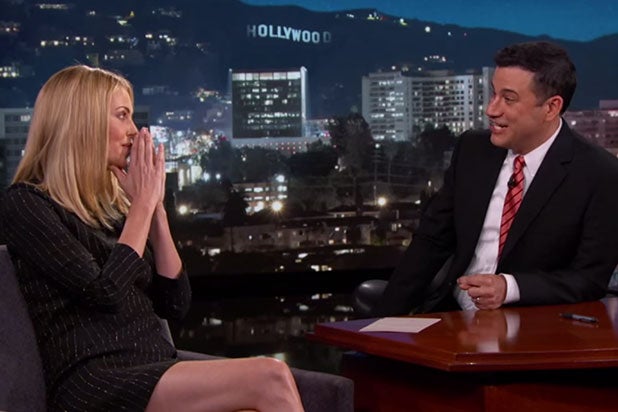 Charlize Theron appeared on “Jimmy Kimmel Live” on Monday night and revealed that on her last visit to the show she embarrassed herself in front of President Barack Obama.

“I have this thing that happens when I get nervous, where I get so nervous that I will say something really inappropriate,” she explained. “It’s like Tourette’s in a weird way, I don’t know how to stop it. It’s like verbal diarrhea.”

Both Obama and Theron were both guests on the show in March when Theron met the president backstage.

“And I was really nervous because I was kind of hiding in the back and somebody from his team like came to get me and ushered me over to him and he like waited to meet with me,” she said. “And everything had stopped around his world to meet me and it was just a lot of pressure, and I was so nervous.”

That’s when Theron said something to the president that she evidently still cannot forget.

As she told Kimmel, “He was really complimentary about you and how grateful he was to be on the show, and that he felt like being on the show he felt he was reaching a demographic, just the younger, Hollywood… you know, he didn’t say it like this so please don’t quote me — because I’m not quoting the president — but something like that.”

“And then there was this pause, and I didn’t know what to say,” the actress continued. “All I could come up with was ‘Well, if you’re looking for a different demographic, I can take you to a strip club?'”

Theron, throughout retelling the encounter, could not hide her embarrassment as she covered her face with her hands.

“It’s terrible! Michelle Obama is going to kill me,” she said. “He was so gracious and funny and he could tell that I was really nervous and he was nothing but lovely, and then I couldn’t sleep for like four weeks because every time I closed my eyes I went, ‘Oh, my God, I said that!'”

To that, Jimmy Kimmel said, “You should say that to all the presidents. If you said that to President Clinton, you’d probably still be at that!”