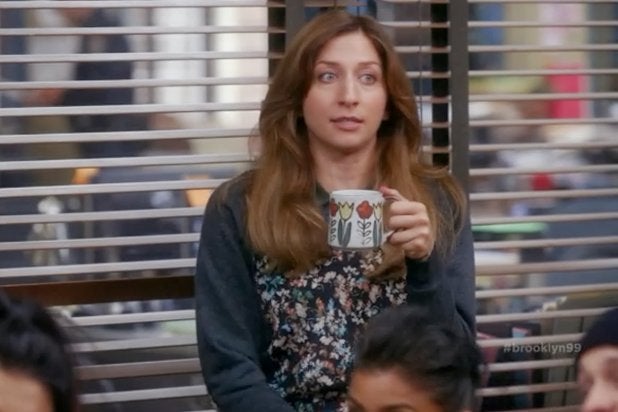 It appears not everyone from “Brooklyn Nine-Nine” will make the move to NBC when the comedy makes its network debut at midseason.

Chelsea Peretti, who has played the precinct’s civilian administrator Gina Linetti, will leave the series during the upcoming sixth season.

“B99 fans. Hiiiiiiiiiiii. Chelsea Peretti, here. I won’t be doing a full season of Brooklyn Nine Nine in Season 6,” Peretti said on her Twitter account Wednesday. “But that doesn’t mean I won’t ever be back, winky face emoji, heart emoji. I want to thank you for the hours you spent watching Gina be Gina”

B99 fans. Hiiiiiiiiiiii. Chelsea Peretti, here. I won't be doing a full season of Brooklyn Nine Nine in Season 6. But that doesn’t mean I won’t ever be back, winky face emoji, heart emoji. I want to thank you for the hours you spent watching Gina be Gina:

“We have tried really hard to create a storyline for her departure that lives up to a character who only be described as ‘The human embodiment of the 100 emoji,'” Goor wrote in a note posted on his Twitter account. “While it’s sad to see a member of the family leave, we are so proud of Chelsea and excited for what she does next.”

Goor also left the door open for her return: “I know for a fact that isn’t the last we’ll see of Gina Linetti. I mean, she got run over by a frickin’ bus, and she only missed like a week of work.”

“Brooklyn Nine-Nine,“ which was saved by NBC just a day after being canceled by Fox after five seasons, will debut at some point during midseason.