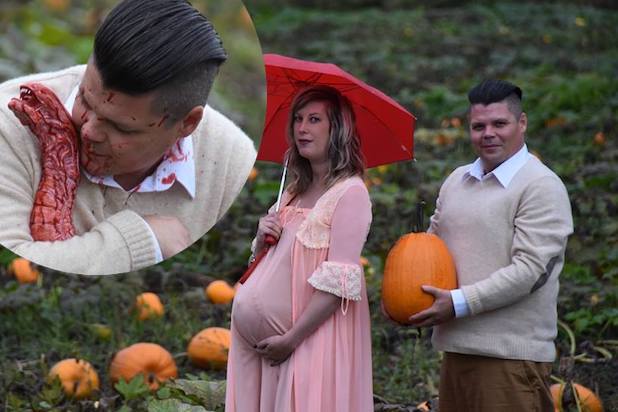 Father-to-be Todd Cameron has taken to Facebook this month to share seemingly conventional maternity photos with his expectant partner Nicole. The Canadian couple, surrounded by pumpkins, made typical maternity poses — from a sweet, standing embrace to a sitting belly hug.

However, as photos in the post progress, the shoot takes an extraterrestrial twist. Nicole laid on her back with a bloodied “Alien” franchise-style Chestburster emerging from her torso. Splattered in fake blood, Todd chased after the wriggling Xenomorph.

Well, you won't believe what happened yesterday DURING OUR MATERNITY SHOOT!!! Our chests are bursting with love for our…

After successfully wrangling the creature, the couple cradled the Chestburster, which they named Burston, in their arms.

The couple met on Halloween and both love the holiday, Cameron told TheWrap over email on Tuesday.

“This particular idea came about when I was at a garage sale and found a model of an ‘Aliens’ Chestburster,” Cameron said. “I brought it home, of course, and as I was putting it together and painting it, the idea of a maternity shoot came to me. Nicole wasn’t interested in a traditional maternity shoot so our planning began.”

Also Read: 'The Simpsons': Next Year's 'Treehouse of Horror' Will Be Episode 666

The endearing-yet-scary photos, taken by Li Carter (Instagram), garnered a mixed bag of reactions. Many Facebook users cheered on the couple for their comedic photos while others reacted angrily at the collection (scroll through them above).

Cameron’s Facebook post ended with action figures of the films’ villains assuming grandparent roles, complete with knitting needles in claw and a box of “Face Huggies” diapers ready to use.

“I wanted to take the viewer through an emotional journey from ‘Oh look, another maternity shoot’ to ‘Hmmm, something’s not right’ to ‘OMG What in the hell is happening?’ to ‘This is hilarious!'” Cameron told TheWrap.

“The experience has been overwhelmingly positive and fun!” he added, saying he probably won’t show their child the pics until he or she is 12 (he didn’t reveal the sex of the baby).

“This is, in a way, our child’s first halloween costume,” said Cameron. “It went viral, and our child won’t know for years!”