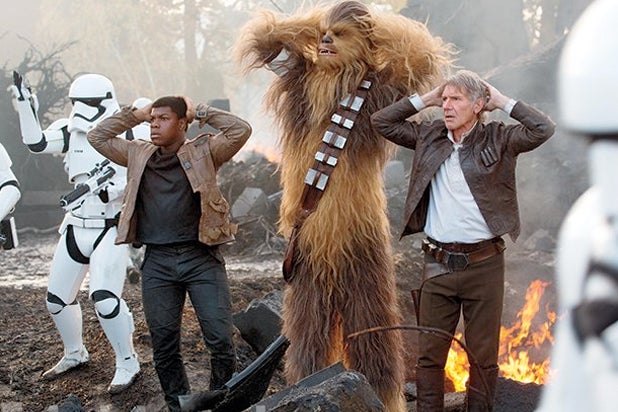 Disney chief Bob Iger talked “Star Wars” during his time at the Deutsche Bank 2016 Media, Internet & Telecom Conference on Tuesday, confirming that Chewbacca would appear in the new Han Solo standalone movie being directed by Phil Lord and Chris Miller.

Iger also revealed that Disney would be taking a writedown of about $75 million hit on Chris Pine‘s fact-based Coast Guard rescue movie “The Finest Hours,” which grossed just $27 million domestically since its release on January 29.

The next film in the “Star Wars” universe to hit theaters will be Gareth Edwards‘ “Rogue One: A Star Wars Story,” which is due on Dec. 18.

“‘Rogue One’ … is about a band of rebels plotting to steal the plans to the Death Star,” the Disney boss said. “It takes place right before what was George Lucas‘s first film, which came out in 1977 and is now called ‘A New Hope.'”

“We have others in the works, including one, which is an origin story about Han Solo and Chewy,” he continued. “And that’ll come after ‘Star Wars 8’ in 2018. And then there’ll be possibly be more thereafter.”

Many “Star Wars” fans had assumed that Chewbacca would play a major role in the young Han Solo movie, but it had never been confirmed until Tuesday. Disney is still in the midst of casting a star.

Chewbacca actor Peter Mayhew recently teased a special announcement that he has yet to make, and it’s possible that he was referring to Chewbacca’s return in the Han Solo film.

Iger told investors, media analysts and reporters listening in to today’s event that these “‘Star Wars': Stories” will be marketed “differently, but aggressively” — an effort to not divert fans from the ongoing saga, but still certainly draw their money.