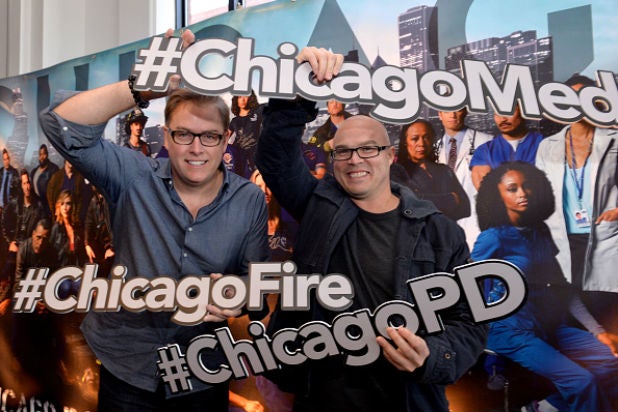 Under the deal, Brandt and Haas will continue to executive produce Dick Wolf‘s “Chicago Fire,” “Chicago P.D.” and “Chicago Med.”

They are also attached to executive produce the pilot “Chicago Justice,” the legal spinoff of the Chicago franchise, which goes into production this month. “Justice” is set to get a backdoor pilot during a May episode of “P.D.”

Brandt and Haas are also currently filming the thriller “Overdrive,” which they wrote and produced, set to premiere later this year.

The duo are longtime writing partners, having collaborated mostly on features including “2 Fast 2 Furious,” “3:1o to Yuma,” and “Wanted.”

The “Chicago” franchise has proven incredibly important to NBC. When it premiered last Nov. 17, “Med” was the top scripted show of the night, debuting to a 2.2 rating/7 share in the advertiser-coveted 18-49 demographic, along with 8.6 million total viewers. For an imperfect comparison, that 9 p.m. debut was 29 percent above the Season 3 premiere of “P.D.,” which aired at 10 o’clock.

“P.D.” has currently been on the air for three seasons, while “Fire” has been lighting up the small screen for four. All three shows have been renewed for new seasons.

Brandt and Haas are repped by WME, Industry Entertainment and Hansen Jacobson.

PaleyFest: Stars Gather for 'An Evening With Dick Wolf' (Photos)