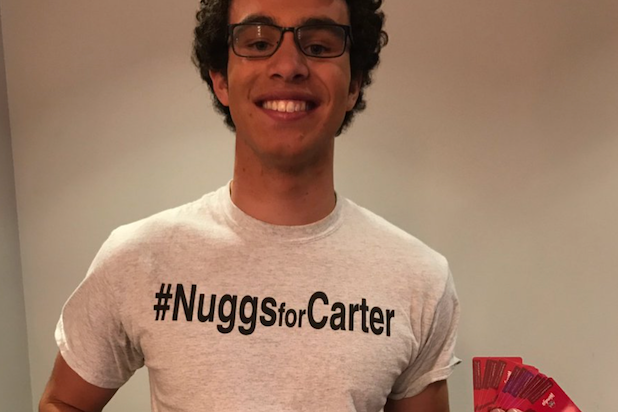 Carter Wilkerson, better known as the man whose request for free chicken nuggets from Wendy’s gave him the most retweeted tweet on the platform, was dethroned this week by a Japanese entrepreneur. The news was first reported by Twitter.

“Drumroll please,” the company said. “This Tweet from Japanese entrepreneur @yousuck2020 now holds the title of most Retweeted Tweet.”

The new tweet from billionaire Yusaku Maezawa is written in Japanese and finds him offering to give users free money in exchange for following him and — surprise, surprise — retweeting the message. As of Monday afternoon, the tweet had racked up more than 5.5 million retweets. The new number blows past Wilkerson, whose own tweet topped out at roughly 3.6 million retweets.

“HELP ME PLEASE. A MAN NEEDS HIS NUGGS,” Wilkerson said in the April 5, 2017 post, which included a screenshot of the official Wendy’s account telling him that if his post reached 18 million retweets they would supply him with chicken nuggets for a year.

And while Wilkerson fell well-short of his goal, the tweet became the most retweeted on the platform for about a year and a half — dethroning the previous record holder Ellen DeGeneres and her star-laden selfie at the 2014 Oscars.

In his slow march to overtaking Ellen, Wilkerson briefly captivated the national media, doing interviews and even appearing on DeGeneres’ popular talk show. While on set in April 2017, the comedian showered the then 16-year-old with gifts but warned him that if he did surpass her, there would be consequences.

On Twitter, Wilkerson took the news of his title being stolen in stride.

“It has been an amazing year and a half and i want to thank everyone who retweeted and helped my receive my year of free chicken nuggets,” he told his more than 100,000 Twitter followers. “Without you guys i would have never gotten my nuggs, we wouldn’t have raised over $100,000 for charity, and we wouldn’t have made twitter history by beating Ellen Degeneres and taking the record”