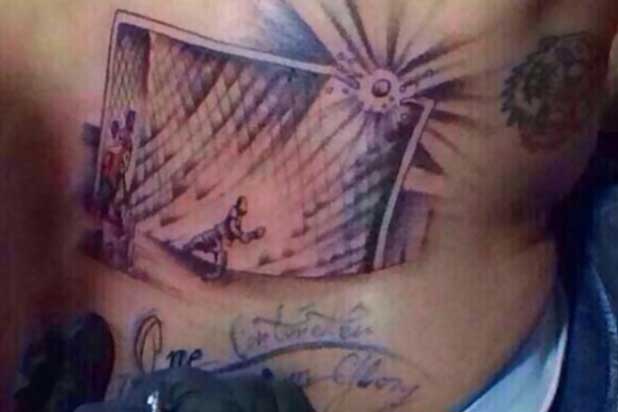 Chile was eliminated by the narrowest of margins in a World Cup knockout game on Saturday when they lost to host country Brazil in a 3-2 contest that eventually came down to penalty kicks.

Mauricio Pinilla, a famous Chilean striker, disappointed himself by missing a a crucial shot near the end of match. Had the ball not careened of the crossbar in the final minute of overtime play, his country surely would have advanced to the quarter finals. Instead, the score remain tied, the team wound up losing during the penalty kick phase, and the team was sent home.

While most would be eager to bury a memory that depressing in the darkest depths of their mined, Pinilla instead tattooed the horrible play onto his flesh.

The 30-year-old Santiago native visited a tattoo shop after the loss and had the artist ink an image of the play — a soccer ball ricocheting off the crossbars — on his lower back. The caption accompanying the art reads “one centimeter from glory”

Ouch. This certainly gives new meaning to the phrase “agony of defeat.”

Brazil plays their next game against Colombia on July 4.