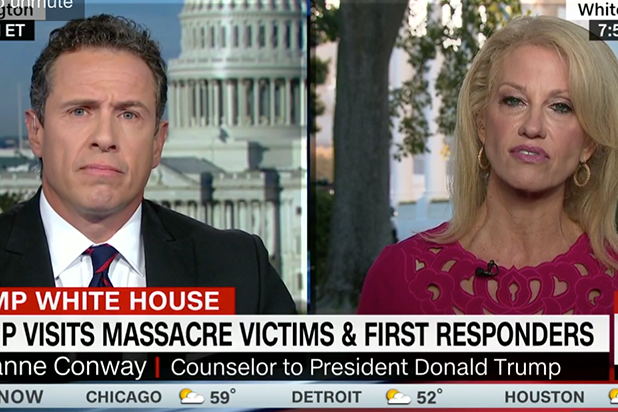 She started by saying the Second Amendment is a “bedrock of our constitution, just like the First Amendment allows you and I to have this conversation at the moment. That should be protected.”

The Second Amendment, which is the right of the people to keep and bear arms, has been an emotional topic since the Las Vegas shooting massacre that left 59 people dead and over 400 injured.

Kellyanne Conway: "The Second Amendment is a bedrock principle of our Constitution … that should be protected" https://t.co/6HTYQA9nG3

Conway tried to focus on the bump stock, the legal device used by the Las Vegas shooter, by pointing out that the Obama administration decided not to regulate the devices. However, Senator Dianne Feinstein introduced a bill Wednesday that would now make them illegal. The devices make it easier for gun owners to circumvent federal laws about semiautomatic weapons.

She then continued to defend Donald Trump’s comment earlier this week that discussing gun control will “come later,” and repeated what many conservative pundits and media personalities have been saying since Sunday night’s tragedy: that it isn’t right to “politicize” the tragic deaths of Americans (an idea Trevor Noah debunked earlier this week on “The Daily Show”).

“If you go and you do a comparable search, you will see that this conversation isn’t being had until tragedies like this strike by those who try to be the loudest voices,” Conway said.

Conway added that Clinton is on a book tour right now, “talking about herself” instead of the tragedy. She  then moved on to Senator Elizabeth Warren, saying she’s tweeted about guns zero times, yet tweeted about Russia 30 times. “I know the high horse calvary loves to rush in, thumping their chest after the tragedies, but let’s step back and have a thoughtful conversation.”

“Kellyanne, I’m tired, so I apologize in advance,” Cuomo responded. “But I have to tell you, a lot of this just doesn’t wash.”

“Of course it was 2010, of course it was the Obama administration,” Cuomo continued, saying that wasn’t the point. “I’m saying don’t cheapen what happened in Las Vegas.”

He described a man and his 16-year-old daughter who lost their wife and mother, and said that all people want to know is why this was able to happen — not why Stephen Paddock used a bump stock.