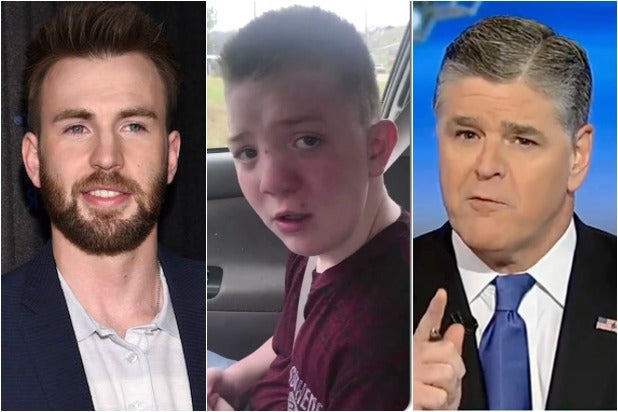 Politically, Chris Evans and Sean Hannity probably don’t agree on anything, but Captain America and the Fox News host are both reaching out to show their support for Keaton Jones, a boy whose tearful speech against bullying went viral this weekend.

In the video, which was posted by Jones’ mother, Kimberly, the boy tearfully asks why kids pick on him by making fun of his nose and telling him he has no friends.

“What’s the point of it?” he wondered aloud. “Why do you find joy in taking innocent people and finding a way to be mean to them? It’s not okay.”

This is Keaton Jones, he lives in Knoxville and he has a little something to say about bullying.pic.twitter.com/coyQxFp33V

The Tennessee boy then turns his attention to other bullied kids, offering them some words of hope.

“If you are made fun of, just don’t let it bother you,” he said. “Just stay strong, I guess. It’s hard. But…it’ll probably get better one day.”

The video has since been viewed over 17 million times, and various celebrities have reached out to show their support, including Evans and Hannity. Evans tweeted that he wants to invite Jones to the premiere of “Avengers: Infinity War” next spring, while Hannity wants to help start a scholarship fund to help with Jones’ education.

Update; Good news, apparently some Titans and Vol players are helping Keaton. The school needs this Fixed immediately or people should be fired. If Someone sets up scholarship account for Keaton, let’s raise $. I’ll start with $10,000. $5,10,25 pp would be amazing. https://t.co/IzLGx2e9V6

Stay strong, Keaton. Don’t let them make you turn cold. I promise it gets better. While those punks at your school are deciding what kind of people they want to be in this world, how would you and your mom like to come to the Avengers premiere in LA next year? https://t.co/s1QwCQ3toi

Evans and Hannity are just two of many prominent celebs that want to show their support to Jones and his family. Delanie Walker of the Tennessee Titans invited Jones and his family to an upcoming game, while other celebrities like “Stranger Things” star Millie Bobby Brown gave their own warm words. See more of the support for Jones below.

@DonteStallworth @Lakyn_Jones hopefully my video and the tweets that Keaton have been getting brings awareness to bullying and how serious it is in our school system pic.twitter.com/1Dujv3RxA5

Meet Keaton Jones a very smart little boy who is being bullied at school. This video is heartbreaking!! I want to bring Keaton to Vegas and hang out at UFC Headquarters. If anyone knows how i can reach the family please let me know. Thank u everyone pic.twitter.com/BR8c4ldDFc

@Lakyn_Jones Keaton, this is so accurate. Why do people do this? I think your sooo cool Keaton! I wanna be your friend ( but srsly) ur freakin awesome ❤️

.@lakyn_jones Hey Keaton, bullies are the ones with the problems NOT you. Many are bullied at home and pass it on. Cowards always need an audience. Be strong! I’ll come walk the hall and eat lunch with you anytime. #IstandwithKeaton #Keatonstrong #KeatonJones

Keaton- hang in there. Keep studying and never lose sight of your dreams. I was bullied and called fat. It gets better. Your bullies have been hurt somehow and that is why they need to hurt. They will fade away. Adventure is out there. #Keatonjones https://t.co/r5pENrI9f3

Keaton, I’m sorry those kids are being so mean. Unless people like that change they will end up having unhappy lives. I think you’re cool!