“Thor: Love and Thunder” is eight months out from its premiere in theaters. But franchise star Chris Hemsworth couldn’t wait another day to release the hounds.

On Instagram Tuesday Hemsworth revealed shooting has wrapped on the film — and showed off a set of guns that very well could surpass the bodybuilder golden mean of 20 inches.

“That’s a wrap on Thor Love and Thunder,” he wrote, standing alongside “Thor” writer, director and actor (he plays Korg) Taika Waititi, who as you’ll see is fully ready for mo-cap. “It’s also national don’t flex day so I thought this super relaxed photo was appropriate.” 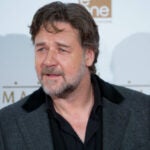 Chris Pratt and Russell Crowe are also starring in the third sequel to be released Feb. 11, 2022. The plot remains under wraps.

“The film is gonna be batshit crazy off the wall funny and might also pull a heart string or two,” Hemsworth wrote. “Lots of love, lots of thunder! Thank you to all the cast and crew who made this another incredible Marvel journey. Buckle in, get ready and see ya in cinemas!!”