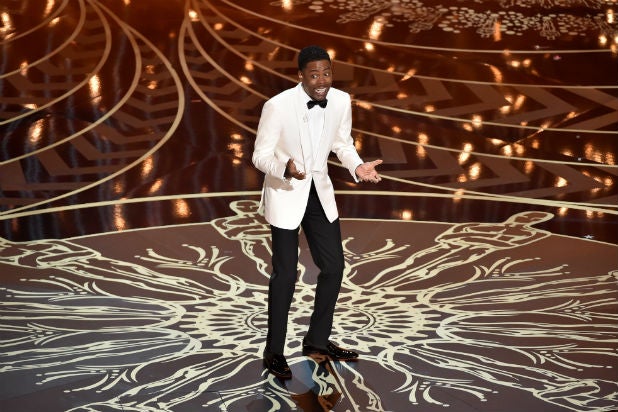 Chris Rock ran head first into the #OscarsSoWhite controversy on Sunday, using his opening monologue to address some hard truths with jokes, anecdotes and a few insults.

“Why this Oscars? It’s the 88th Academy Awards, which means this whole no black nominees thing has happened at least 71 other times,” the host said.

When speculating on why it took so long to for outrage to spark, Rock continued, “black people did not protest. Why? Because we had real things to protest at the time.”

Rock then brought up some of the vocal members of the Hollywood community who pledged to boycott the awards, such as Jada Pinkett Smith.

“Isn’t she on a TV show? … Jada boycotting the Oscars is like my boycotting Rihanna‘s panties. I wasn’t invited,” he said. Regarding her husband Will Smith, Rock acknowledged his performance in “Concussion” was very close to landing him an Oscar nomination this year.

The host conceded it was not fair — and that it’s “also not fair Will was paid $20 million for ‘Wild Wild West.'”

Rock then took aim at the entire industry, wondering aloud if the institution as a whole is racist.

“Is Hollywood racist? You’re damn right. It’s the kind of racist we’ve grown accustomed to. It’s sorority racist. ‘We like you Rhonda, but you’re not a Kappa,” he quipped.

The “Top Five” actor also shared a story about a fundraiser he attended to support President Obama’s reelection campaign, that recruited a few other “usual suspect” African American entertainers like Quincy Jones among the showbiz types.

Rock said he embraced Obama for a photo-op and whispered in his ear, “no one here hires black people, and they’re the nicest white people in the world. They’re liberals. Cheese!”