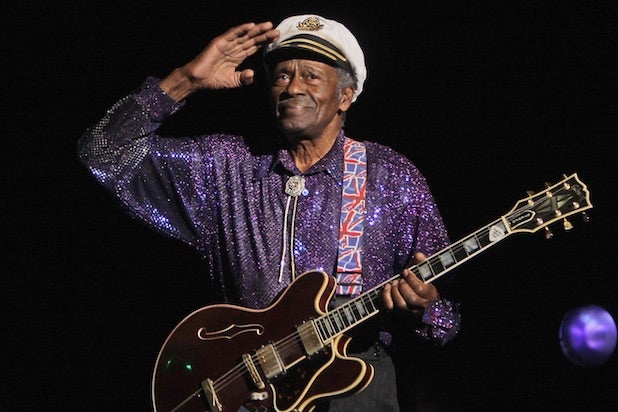 “Chuck,” the final album from rock legend Chuck Berry will be released this week in the wake of his passing, his family said Monday. The record — his first since 1979’s “Rock It” –was first announced on his 90th birthday in October. Berry passed away on Saturday at age 90.

In a Facebook post, Berry’s family says working on “Chuck” brought the rocker “a great sense of joy and satisfaction,” and that there was “no better way to celebrate and remember his 90 years of life than through his music.”

Since Chuck’s passing on Saturday, the Berry family has received many inquiries from friends, fans and media about the…

Berry is known for being the singer and songwriter of rock and roll classics such as “Maybellene,” “Roll Over Beethoven” and “Johnny B. Goode.” He was one of the first inductees into the Rock and Roll Hall of Fame when in opened in 1986. He influenced many musical artists, from Elvis Presley to The Beach Boys.

Over the weekend, the icons he inspired took to Twitter to mourn the loss of their hero. Bruce Springsteen said, “Chuck Berry was rock’s greatest practitioner, guitarist, and the greatest pure rock ‘n’ roll writer who ever lived.” Lenny Kravitz tweeted, “Hail Hail Chuck Berry!!! None of us would have been here without you. Rock on brother!”

Berry died on Saturday at 90 in Missouri after the St. Charles County police responded to a medical emergency.