UPDATE: In a statement to TheWrap after this article was published, Chuck D wrote, “JUST TO BE CLEAR, I’m not the R. Kelly fan here. I ain’t got any of his songs. And his actions were trash.”

Chuck D’s tweet about R. Kelly’s verdict and the U.S. prison system has many people wondering what the legendary rapper was thinking.

The Public Enemy front man tweeted his take after the R&B singer was found guilty Monday on eight counts of sex trafficking and one count of racketeering.

R Kelly’s trial lasted almost six weeks with a jury of 12 — seven men and five women. It concluded Friday in New York. Many of the witnesses who came forward to accuse R. Kelly were Black women, heightening the case’s importance within the larger #MeToo movement. 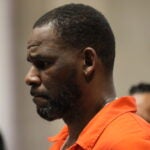 Reactions to Chuck D’s tweet from other entertainers and creatives in the Black community have not echoed his sentiments. Drew Dixon, subject of HBO’s “On the Record” documentary which focuses on how she became one of the first Black woman to come forward and detail her history of abuse by Russell Simmons, called out Chuck D on Twitter for “twisting logic into a pretzel.”

Dixon has retweeted several other replies in the growing Twitter conversation. She even pulled Lindsey Boylan — the first woman to speak out in the accusation of Andrew Cuomo’s sexual harassment — into the thread.

Dixon has also emphasized other responses from Black people like April Reign that discuss how to talk about and correct both Chuck D’s and R Kelly’s behavior.