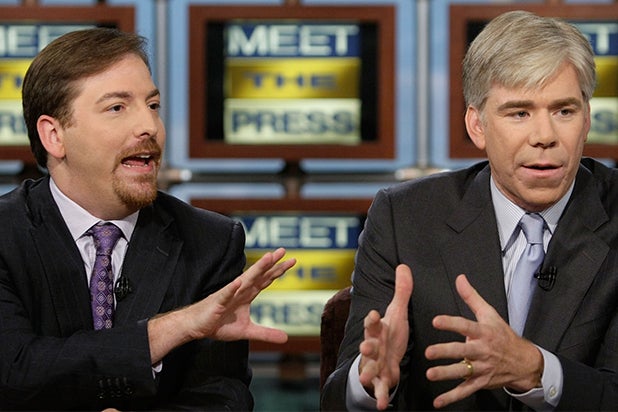 Chuck Todd will officially replace David Gregory as host of “Meet the Press” next month, NBC said in an internal memo on Thursday.

Turness praised and thanked Gregory, and said of Todd: “Chuck will ensure that ‘Meet the Press’ is the beating heart of politics, the place where newsmakers come to make news, where the agenda is set. We have some exciting plans to evolve and update the broadcast under Chuck’s leadership that we will be sharing with you shortly.”

“I leave NBC as I came – humbled and grateful. I love journalism and serving as moderator of MTP was the highest honor there is,” Gregory wrote on the social media network. “I have great respect for my colleagues at NBC News and wish them all well. To the viewers, I say thank you.”

Gregory moderated “Meet the Press” for the past six years.

Todd is NBC News political director — a role which he will continue. He will cease to host “The Daily Rundown,” which airs in the 9 o’clock hour on MSNBC.

Todd will also give up his role as chief White House correspondent. Turness’ memo is posted below.

I want to share some news about Meet the Press. After an exceptional 20 years with NBC News, David Gregory is leaving the network.

I want to express my sincerest thanks to David, who, after the death of Tim Russert, led Meet the Press for almost 6 years. Under his leadership the show has had a string of exclusives, and David has shown a remarkable gift for holding leaders to account and getting answers on issues that matter to our audience. He is an outstanding journalist whose sharp intellect and quick sense of humor have made him a pleasure to work with. I know you all join me in expressing our deepest gratitude and in wishing him the very best.

I am very pleased to announce that Chuck Todd will take the helm on September 7. There is no one with a bigger passion for politics than Chuck. His unique ability to deliver that passion with razor sharp analysis and infectious enthusiasm makes him the perfect next generation moderator of this beloved broadcast. Chuck will ensure that Meet the Press is the beating heart of politics, the place where newsmakers come to make news, where the agenda is set. We have some exciting plans to evolve and update the broadcast under Chuck’s leadership that we will be sharing with you shortly.

Chuck will continue as NBC News political director, and will hand over his roles as chief White House correspondent and anchor of MSNBC’s The Daily Rundown.

Andrea Mitchell will serve as moderator of Meet the Press this weekend, and will continue to be a central figure of the broadcast, along with some new names that we will announce in the coming days.

For nearly seventy years, Americans have turned to Meet the Press on Sunday mornings for unrivaled insights on the news stories, political battles and public affairs debates dominating the national discussion.  The next-generation Meet the Press, led by Chuck Todd, is certain to be the must-watch political destination on Sundays and beyond.