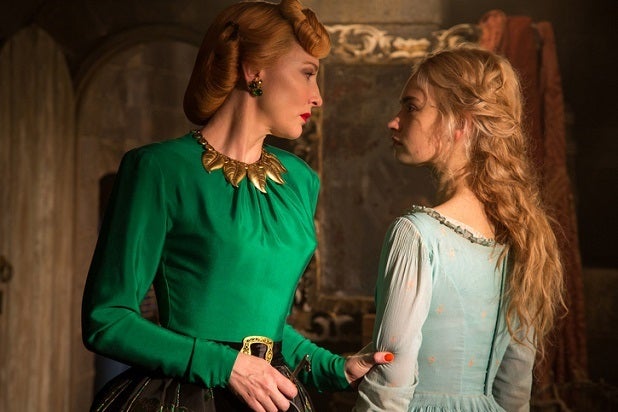 Disney’s “Cinderella” was the No. 1 movie at the international box office this weekend, but there were plenty of fireworks to go around in an explosive performance for American movies.

The fairy tale update took in $38.7 million from 53 markets to lead the way, and in the process upped its foreign total to $186 million and its worldwide box office haul to $336 million in three weeks. This weekend it debuted at No. 1 in the U.K., Spain, Brazil, Australia and New Zealand. In China, “Cinderella” has exceeded $65 million and is the No. 2 live-action Disney title ever.

Lionsgate’s “The Divergent Series: Insurgent” followed with nearly $30 million from 82 markets, lifting its overseas total to $92 million and global gross to $180 million after two weeks.

The third-highest grossing film overseas was the studio’s “Kingsman: The Secret Service,” which continued its successful Asian run with a $20 million debut in China.  With its $25 million haul this weekend, the Colin Firth spy spoof is up to $209 million from abroad and $328 million worldwide, with Japan and Venezuela to come.

DreamWorks Animation’s family film “Home” followed with $24 million from 65 markets, lifting its international total to $48 million after two weeks. With its $54 million No. 1 debut in North America this weekend factored in, “Home” is up to $102 million globally.

In fifth place was the Will Smith caper comedy “Focus” with $8.2 million from 63 markets.