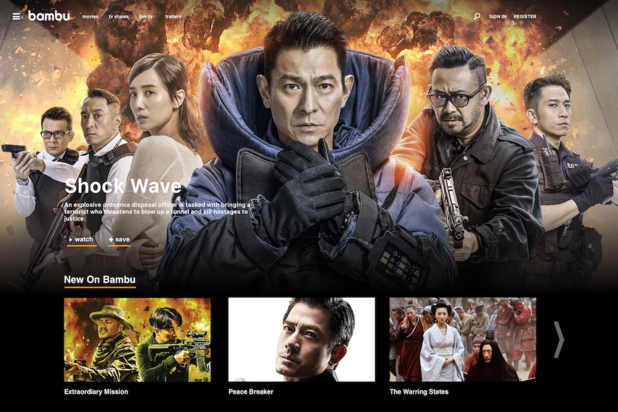 Bambu, Cinedigm’s streaming service that will bring Chinese content to American audiences, will have a two-tiered pricing structure and will feature content from Chinese superstar Donnie Yen, the company announced on Wednesday.

The streaming service, which is expected to launch in Q1 of 2019, will offer customers a free, ad-supported version of its service, as well as an ad-free paid version for $3.99 per month.

With a focus on attracting Gen Z (16-24) and millennial audiences (25-35), titles on the service will include Chinese native films including the bomb squad thriller “Shock Wave,” starring Andy Lau; the sci-fi epic “Kung Fu Traveler”; and Yen and Chow Yun-fat in 2016’s “The Monkey King: Havoc In Heaven’s Palace.” Bambu will also feature the most-watched show in Chinese TV history “Journey to the West”; the thriller “Lost in Translation”; the popular cooking docu-series “A Bite of China”; and the fantasy crime show “The Four.”

“Young Americans are incredibly culturally savvy, and proudly receptive to the latest global trends,” said Erick Opeka, Cinedigm’s president of Digital Networks. “BAMBU allows these modern tastemakers to stay at the cultural forefront, introducing them to a roster of new series and up-and-coming artists. It also presents tremendous potential for substantial marketing opportunities, opening up China’s prolific and profitable content industry to a massive American audience.”

In addition to advancing the company’s bilateral flow of content and OTT streaming networks between North America and China, Cinedigm said that Bambu will provide immediate and invaluable audience feedback to Chinese producers working to produce films and television for a global audience.

“This is phase one in what we envision as a fruitful partnership between the United States and China, enriching both cultures by providing them with the absolute best in Chinese and American entertainment, respectively,” Opeka added.