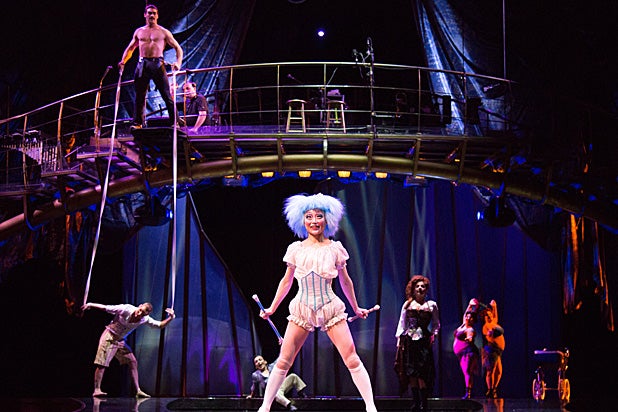 Cirque du Soleil’s most famous shows such as “O,” “Zumanity,” and “Kurios” play back-to-back nights around the world, but guests in Las Vegas Friday will get to see a one-off, unique show never to be performed again.

Even better news is that the 60 Cirque artists, acrobats and dancers will be joined by “Star Trek” actor William Shatner, “America’s Got Talent” winner Grace VanderWaal, Grammy-nominated rapper RedFoo, and multi-platinum selling vocal group The Tenors for the performance.

Plus, the proceeds of the “One Night for One Drop” gala event at Las Vegas’ New York-New York Hotel and Casino go to charity, to benefit founder Guy Laliberté’s fundraiser dedicated to providing safe water access.

“It is a global philanthropy event but it’s also a chance for all the people who work at Cirque to get together and do things creatively that don’t normally get to do,” Pien Koopman, Cirque du Soleil Manager of Communications, told TheWrap.

“One of the band leaders from ‘Zumanity’ is the composer for the show, some of our regular dancers have been asked to choreograph pieces,” she said, adding that even the writers [Nicky and Letitia Dewhurst] were originally performers in ‘Zumanity.’

Keeping with the circus themes of many Cirque shows, “One Night” tells the story of an old ringmaster going back in time to look at how he has lived his life and treated people around him. “He realizes that he hasn’t been as kind and loving as he should have been,” Koopman said. “The theme takes the issue of conserving water to a little higher, to being about how humanity treats the earth.”

Also Read: Rihanna Accepts Harvard's Humanitarian Award: 'So, I Made It to Harvard' (Video)

The cast — which rehearsed for three months for a single performance — includes an amazing trapeze duo called Duo Cloud Angels, a clown act from San Francisco called Daredevil Chicken, and — most surprisingly, rapper Redfoo playing “The Voice of Reason.”

“This is the only time that a Cirque show is just one performance, so it is a very special show,” Koopman added. “It is the Olympic Games and the Oscars rolled into one for us.”

Along with witnessing a gravity-defying once-in-a-lifetime show, guests will have the opportunity to bid on ultra exclusive auction items, including a visit to Richard Branson’s legendary Necker Island, and attend his pro-am tennis event. 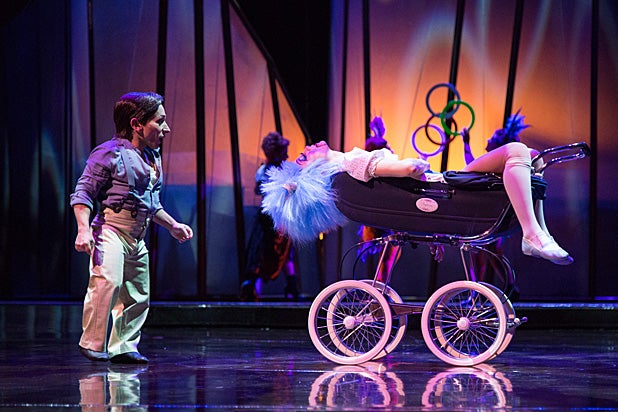 To find out more or to bid on the auction items, visit CelebrityBuzz.com.

See all the auction items below.

Four ultra-exclusive items will be auctioned live on March 3, prior to the evening’s entertainment:

One of the last two Richard Mille Women’s Collector Timepiece 007 on the market. This rare, iconic RM 007 women’s watch combines technology with elegance – and an uncompromising attention to workmanship.  (Estimated Value:  $50,000)

10-hour flight time on a Bombardier Challenger 350: A bundle of ten flight hours for you and up to seven friends to take a private chartered jet to anywhere you’d like to go. Flight includes a pilot, co-pilot and flight attendant, the epitome of comfort and technology in the ultra-roomy and elegant cabin.  (Estimated Value:  $60,000)

Test your limits on an extreme sports powerboat ride with adrenaline enthusiast Guy Laliberté, Founder of Cirque du Soleil and One Drop: Guy is offering the opportunity for someone to join him from October 9-11, 2017 on Lake Como to live the thrill of reaching 160 mph (257 km/h) on the water surrounded by one of the most wonderful landscapes Italy has to offer.  Onboard the 2-seater Poliform 74 Class 1 Powerboat, feel the speed of Man and Machine against water. (Estimated Value:  $85,000)