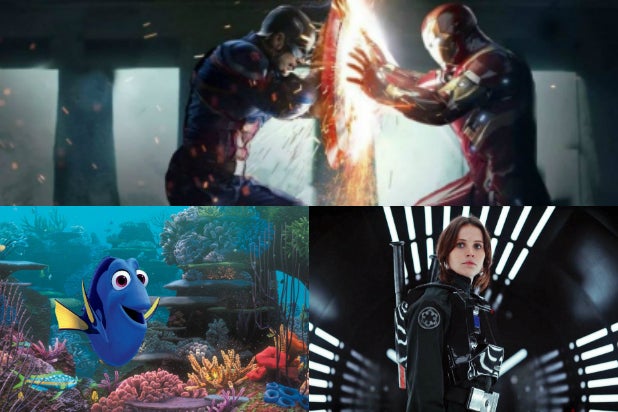 Disney is in the middle of its own Civil War.

The massive $181.8 million opening for “Captain America: Civil War,” which pushed “The Jungle Book” to the No. 2 position this weekend, represents a stunning new phenomenon: The biggest rivals for Disney films this year are other Disney films.

The company’s 2016 slate is already breaking records as upcoming would-be blockbusters like “Alice Through the Looking Glass,” “Finding Dory,” and “Rogue One: A Star Wars Story,” are coming from under Disney’s umbrella. It’s perhaps the best problem a studio could have.

Also Read: 'The Jungle Book' Is on Track to Top $1 Billion at Global Box Office

“The only thing that’s going to hurt Disney is Disney itself,” Exhibitor Relations senior analyst Jeff Bock told TheWrap. “They’re going to run into themselves many times this year. That’s not gonna stop.”

“Civil War” returns got Disney past $1 billion domestically for the year so far, in just 128 days, easily beating the 165 days it took Universal to hit $1 billion last year. (Universal’s top executive, Donna Langley, called the massive 2015 “a tough act to follow” at CinemaCon a month ago, discussing the year when its slate, including “Jurassic World” and “Furious 7,” scored $3 billion domestically and $5 billion worldwide.)

Disney would have to mess up royally to place anywhere but first this year as its lineup is heavily stacked on all fronts with sequels coming from proven performers. They include “Alice Through the Looking Glass” (out May 27) and  “Finding Dory” out (June 17). The original films for both titles, “Finding Nemo” (2003) and “Alice in Wonderland” (2010), are in the top 40 highest grossing films of all time, domestically, and the top 35 worldwide.

Analysts predict that while 20th Century Fox’s “X-Men: Apocalypse” may beat “Alice” at box office when both films open May 27, “Dory” will surely swim to dominance in June.

There are some unproven wildcards from Disney this year, including Steven Spielberg‘s adaptation of the popular Roald Dahl book “The BFG,” in theaters July 1, and the live action version of “Pete’s Dragon” coming Aug. 12. There is also the launch of Marvel’s “Dr. Strange,” starring Benedict Cumberbatch and Tilda Swinton, in theaters Nov. 4.

Whether those newer titles win big or perform just OK, Disney still has a big closer planned to end the year: Lucasfilm’s “Rogue One,” with Felicity Jones, Mads Mikkelsen and Ben Mendelsohn. The second “Star Wars” movie to come out under Disney is a prequel, depicting events that occurred decades before “The Force Awakens.”

Given that Disney has already surpassed Universal’s pace on three high-performing titles (“Zootopia,” “Jungle Book” and “Civil War”), and we still have three more would-be mega-hits to come (“Alice,” “Dory” and “Rogue One”), 2016 is Disney’s year.