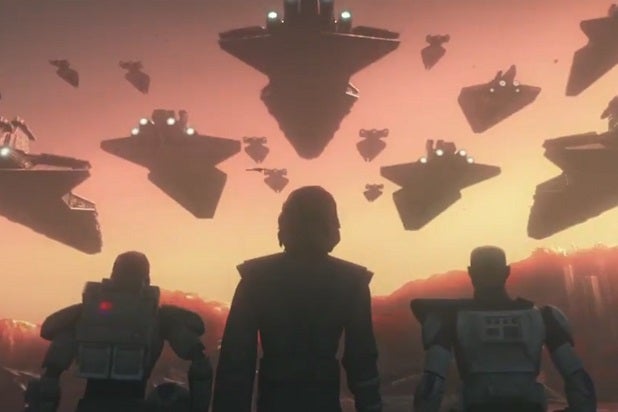 The revival of “Star Wars: The Clone Wars” has a premiere date: The animated series about the adventures of young Obi-Wan Kenobi and Anakin Skywalker will launch on Disney+ in February 2020.

The news was announced Friday during Disney’s biennial D23 Expo in Anaheim, California.

Originally running for 6 seasons from 2008-2014, “Star Wars: The Clone Wars” filled in the gaps of what happened to the characters of the “Star Wars” prequels between “Episode II: Attack of the Clones” and “Episode III: Revenge of the Sith.” It heavily featured the exploits of Anakin Skywalker (Matt Lanter), his Padawan apprentice Ahsoka Tano (Ashley Eckstein) and Obi-Wan Kenobi (James Arnold Taylor), as well as a group of the Republic clone troopers fighting in the war against the Separatists.

The series was canceled after Disney’s purchase of Lucasfilm, with much of the story left unfinished. Some narrative elements were picked up later in the animated series “Star Wars: Rebels,” which takes place much closer to “Episode IV: A New Hope” in the overall “Star Wars” saga — that movie is set 19 years after the events of “Revenge of the Sith.” Both Ahsoka and Anakin, as Darth Vader, make appearances in “Rebels,” as does Obi-Wan, who by this point is hiding out on Tatooine and watching over a young Luke Skywalker.

The seventh season of “Clone Wars” was announced during the show’s 10th anniversary panel at San Diego Comic-Con 2018. The 12-episode revival will be exclusive to Disney+.