The biggest names and brightest talent in country music were celebrated at the CMA Awards Wednesday, hosted by Carrie Underwood and Brad Paisley for the eighth straight year.

The 49th Annual CMA Awards were held at the Bridgestone Arena in Nashville, Tennessee, and aired live on ABC.

Coming into the night, Eric Church and Kenny Chesney both had five nominations each, including Entertainer of the Year, while Chris Stapleton, Little Big Town and Florida Georgia Line all scooped up awards.

“Girl Crush” by Little Big Town won both Song of the Year and Single of the Year, and the band rewarded fans with a stellar performance of the hit.

Justin Timberlake and rising country star Chris Stapleton stole the show, however, as Memphis native JT returned to his Southern roots for a duet of Stapleton’s “Tennessee Whiskey.”

Along with winning, co-hosting and performing, Underwood also had time for a comedy skit with Paisley and William Shatner, who came out on stage dressed as a Stormtrooper from “Star Wars.”

The co-hosts also pulled off a light-hearted joke about Blake Shelton and Miranda Lambert’s divorce by comparing them to Miss Piggy and Kermit the Frog. Lambert went on to have the last laugh by winning Female Vocalist of the Year. 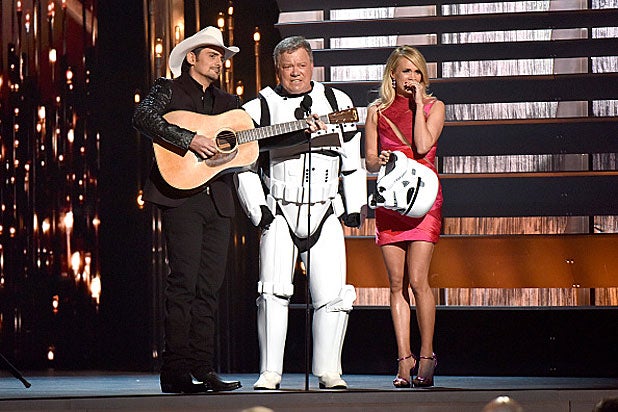 Also among the top performances were the Zac Brown Band tantalizing the crowd with a psychedelic show for “Beautiful Drug.”

See the full list of nominees below, winners are in bold.