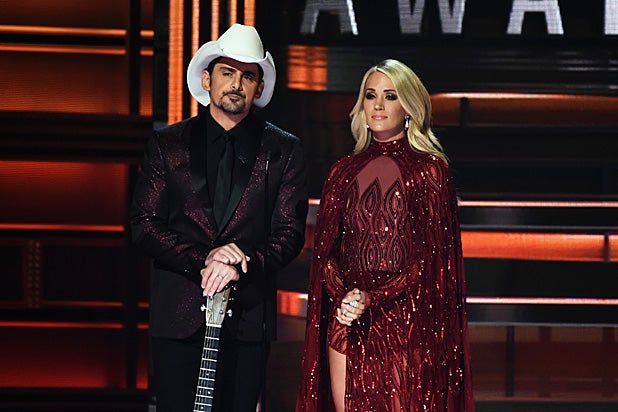 Carrie Underwood and Brad Paisley hosted the show once again for the 10th straight year, while Dierks Bentley, Garth Brooks, Luke Bryan, Reba McEntire, Keith Urban and Faith Hill were among the performers.

The 2017 CMAs marked the first large gathering of country music stars since the shooting massacre at the Route 91 Harvest festival in Las Vegas on Oct. 1 while Jason Aldean was performing. The lone shooter, Stephen Paddock, killed 58 people and injured 546 more.

“This has been a year marked by tragedy, impacting countless lives, including so many in our country family,” Underwood said to open Wednesday’s awards.

“The way we see it, the best way to honor our fans is to play our music loud and proud,” Paisley continued. “Our music lifts people up.”

“This year’s show is dedicated all those we’ve lost, and all those still healing,” he added.

See the full list of winners (in bold) below.

Album of the Year
The Breaker, Little Big Town
From A Room: Volume 1, Chris Stapleton *WINNER
Heart Break, Lady Antebellum
The Nashville Sound, Jason Isbell and the 400 Unit
The Weight of These Wings, Miranda Lambert