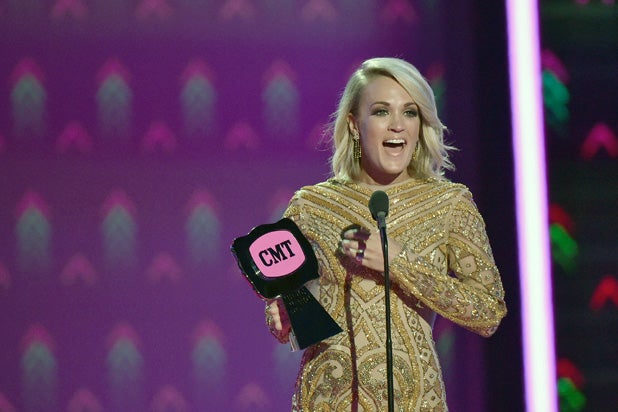 Houston Texans defensive end J.J. Watt may not have a Super Bowl ring — yet — but he did have the honor of co-hosting the 2016 CMT Music Awards with Erin Andrews on Wednesday night.

“Smoker Break” singer and past winner Underwood went into the night with a slew of nominations as always, with Chris Stapleton and Cam also leading the pack.

The former “American Idol” winner (pictured above), Shelton, Pitbull and Fifth Harmony all delivered knockout performances during the glamorous event, after Maren Morris, Keith Urban and Brett Eldredge kicked off the show.

Also Read: 'Nashville' in Talks for Season 5 at CMT

Fox Sports personality and “Dancing With the Stars” co-host Andrews emceed the 2015 CMT Awards. Watt, meanwhile, was a presenter at last year’s event and is a three-time winner of the NFL’s Defensive Player of the Year award.

“I’m thrilled to come back to Nashville to co-host the CMT Music Awards,” Andrews said when it was announced that she was talking the helm again. “I had so much fun last year, and I can’t wait to see what antics J.J. and I will get into together.”

The only person more excited about the pairing was Watt’s mom, who hand-wrote a note for her 6-foot-5 powerhouse of a boy, telling him how happy she was for him.

“When you’re preparing for the show and find this from mom and realize that even at 27 years old, mom can still make you smile like nobody else can. ‪#‎ItsTheLittleThings‬,” the NFL star wrote on Facebook Wednesday morning.

See the full list of 2016 CMT Awards winners (marked in bold) below.

Music's biggest names -- from Carrie Underwood to Pharrell Williams -- headed to the Bridgestone Arena in Nashville, Tennessee, for the fan-voted awards show.